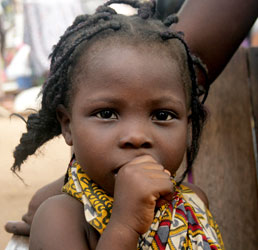 The children’s rights situation in the Ivory Coast is similar to the country’s political situation which is chaotic. Ravaged by successive civil wars, the country has much progress to make in health care, education, child trafficking and child labor. 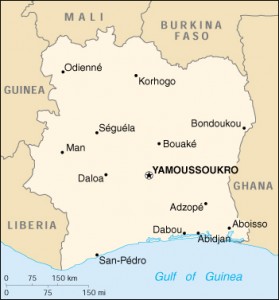 Main problems faced by children in the Ivory Coast:

It is estimated that 42% of the Ivorian population suffers from poverty. The income of workers in the Ivory Coast has markedly dropped during the last decade and experts estimate that if this situation continues, the poverty rate will reach 64% by 2015. As often happens, rural areas are particularly affected by poverty. In addition, it has been observed that the street children phenomenon is also very widespread in the Ivory Coast.

Access to health care is problematic in the Ivory Coast. The under-5 mortality rate rises to 119‰. Additionally, appoximately one out of every ten children dies at birth.

The main cause of infant mortality is malaria. On average, 60,000 children die each year. Diarrhea and respiratory infections are also often fatal. Thanks to massive vaccination campaigns, notable progress has been made in recent years, but the situation still remains serious, especially in rural areas, due to a lack of medical facilities.

The Ivory Coast is the country most affected by AIDS in West Africa: 10 % of individuals in Africa who are infected by this pandemic live in the Ivory Coast. UNAIDS statistics reveal that more than 400,000 children in the Ivory Coast are orphans as a result of this disease. Around 16,000 children contract the virus every year; only a minority will have access to treatment. It is crucial for the Ivory Coast to continue to increase awareness and inform young people about the dangers of AIDS and about prevention methods. 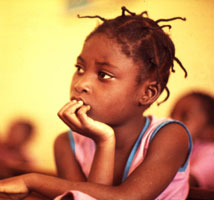 Only 62% of Ivorian children attend school. There is inequality in access to education between girls and boys as well as between urban and rural areas.They desperately lack facilities as well as qualified individuals in the Ivory Coast. As a result, nearly half of Ivorian children never reach the 5th year of primary school.  This can primarily be explained by the fact that schooling is neither free nor mandatory.

Approximately one in three children in the Ivory Coast is forced to work in order to provide for themselves and their families. There are more than 5,000 children working in the cocoa plantations, of which less than 1% are paid. In urban areas, the “little maids” phenomenon is common: it refers to very young Ivorian girls who are exploited as domestic servants. Other sectors also employ a large number of children, particularly in woodworking and in the food and craft industries. Even worse, there are Ivorian children who risk their lives on a daily basis in the mines, where living conditions are even more precarious. 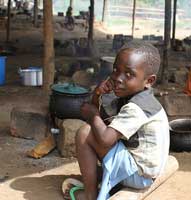 More than 40% of the population in the Ivory Coast does not have access to basic sanitary installations. The problem is especially serious in rural areas where more than 4 million people drink untreated water. Many children die from diarrheal illnesses and other waterborne diseases; hygiene is just as problematic in this country, where not every school is equipped with toilets.

The Ivory Coast is one of 20 countries on the blacklist of nations at war where child soldiers are used. UNICEF estimates that around 5,000 child soldiers have taken part in successive armed conflicts that have torn the country apart for the last ten years.

Not all child soldiers fight on the front lines: they can also be recruited by an armed group and serve as cooks, porters, spies, messengers, sex slaves and human mine detector. The reintegration of these children into society is extremely difficult in the Ivory Coast, where civil wars are ongoing and some young people do not know what else to do with their lives.

In many African countries, there is a tradition of sending children abroad so that they may learn a trade. However, over the years this practice has developed into actual child trafficking, run by middlemen who pay parents and exploit their children. The Ivory Coast has become the hub for child trafficking.  Children in rural zones are most affected by trafficking, taken to wealthier urban areas, they are forced into all types of work and are often mistreated. Many of them work on cocoa farms.

Approximately 35% of young Ivorian women reveal that they were married before 18 years of age. These marriages result in serious health consequences for the young women as they are not psychologically prepared and they do not understand of all of the responsibilities and consequences involved in marriage. Also, they are often raped on their wedding night and are victims of sexual violence during future encounters. Furthermore, these young women are neither mentally nor physically ready for pregnancy. 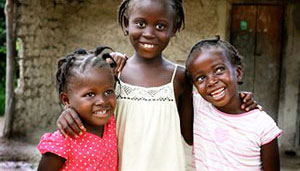 Only one half of births are officially registered in the Ivory Coast. This shortcoming may be explained, in part, by the violent conflicts which have torn the country apart during recent years.

Birth registration and attribution of nationality grant judicial capacities to a child. Which means that children without an identity will not be officially recognized as members of society nor will they be able to exercise their citizenship rights.