“My people have been deprived of numerous rights granted to human beings: health, education, leisure. They have the right to live with dignity.”
Kãhu Pataxó lives in Brazil in the indigenous village of Pataxó at Coroa Vermelha.

This account, unfortunately, reflects a reality lived by a large number of minority children around the world. Corruption, exploitation, domination, and discrimination represent obstacles they must overcome every day. These vulnerable and isolated children see their elementary rights flouted without access to the resources necessary to make them respected. 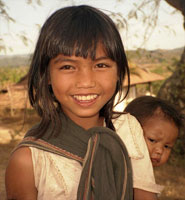 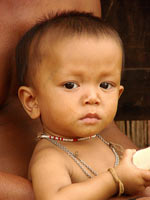 What is a minority child?

A population is designated as a minority when it has a numeric inferiority and when it possesses its own identity. This notion may be used in several areas, for example: a linguistic minority, a religious minority, a political minority… A minority group seeks, in principle, to preserve and cultivate its differences and interests. Minority children are therefore children from a minority population.

Why speak of minority children?

The notion of “minority” is logically opposed to that of “majority”. It is one of the most important obstacles that minority groups must face. In effect, they are subject to a pressure, sometimes unconscious, from majority groups and become vulnerable and easily discriminated against. A child, already weak from its status, is doubly affected. On one hand, their elementary needs are not assured, and on the other hand, the isolation inherent in the minority groups they belong to reinforces these discriminations.

Thus, the opinion and situation of minority children remain marginalised and are not sufficiently taken into account. Their particularities are ignored , the respect and preservation of which are in grave danger. Because of this, it is necessary that minority children benefit from special protection and particular attention on a legal level.

What is the situation of minority children?

The rights of minority children are very often violated, notably by acts of discrimination, racism, and non recognition. The enjoyment and exercise of their fundamental rights face numerous barriers. They are, for example, underprivileged regarding their access to education by administrative difficulties regarding  registration. Basic care as well as birth registrations are very often lacking in minority communities.

In some regions of the world, minority children must also fight to survive. Their cultural difference incites those who don’t understand to commit inhuman and cruel acts. The most extreme forms are notably apartheid and genocides. These types of crimes are so very tragic and constitute attacks on the most fundamental right of all children: the right to life.

Consequently, these children must fight their entire lives to have their rights respected, their opinions heard, and their protection assured. 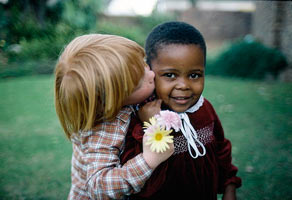 What is an indigenous child?

The term “indigenous” for a child means that its presence in an area may have been established for many generations. A population is labelled indigenous when it considers that its ancestors are the original inhabitants of a place. Generally, indigenous populations are also minorities, and because of this, face a twofold discrimination. Numerically inferior, they also must fight for the important symbolic character that is attached to their territorial affiliation. Specific regulations must be implemented, notably in areas where these people are particularly attached: fishing, hunting, and the protection of their territory.

The rights granted to minorities, and notably to their children, don’t constitute a particular advantage, but only the possibility for them to live respecting their customs. It involves reciprocal rights, taking into account the obligation of minorities to respect national rights.

Unfortunately, because of their numerical inferiority, these people struggle to make their rights respected. For this reason a number of legal instruments have been implemented with the goal of guaranteeing a protection that is effective and uncontested.

Certain treaties or declarations are specifically dedicated to minority rights and each contains provisions on the respect of children belonging to these groups. For example, there is the declaration of the United Nations on minorities adopted in 1992.

Children being the most vulnerable and often the most accessible, the Convention on the Rights of the Child (CRC) includes an article directly guaranteeing the rights of minority Children. It is article 30, which stipulates:

“In those States in which ethnic, religious or linguistic minorities or persons of indigenous origin exist, a child belonging to such a minority or who is indigenous shall not be denied the right, in community with other members of his or her group, to enjoy his or her own culture, to profess and practise his or her own religion, or to use his or her own language.”