In 1954, the UN recommended that « every country should introduce a Children’s Day which will be devoted to fraternity and to comprehension among children of the world, and which will stand out by activities encouraging Children’s well-being throughout the world. » (1)

If the UN « suggests to governments of each states to observe children’s Day on the day and in the way that best suit them », events of 1959 and 1989 designate inevitably the 20th November. 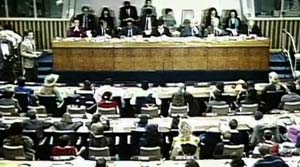 According to Resolution 836 (IX) of December 1954 of the United Nations, the original appellation for this day is « Children’s Day ».

The establishment of a Children’s day by the UN aims at attracting the attention on an important issue: Children’s well-being throughout the world.

The United Nations have considered that they “ would not be able to fulfill their obligations regarding the future generations without intensifying their efforts in favour of Children in the world, who are future citizens, and that a worldwide celebration of this Children’s day would contribute to human solidarity and to international cooperation » (1).

Each year, November 20th reminds us that « humanity must give children the best it can provide » (2). This day reminds us of the necessity of acting in favour of the well-being of children in the whole wide world.