The Convention on the Rights of the Children

Issues of the Convention

The guarantee and protection of the children’s rights is the primary concern at stake regarding the convention.

A legal text involving obligations of the States 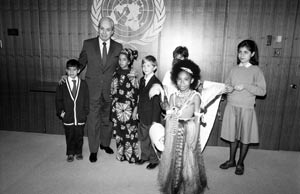 The international Convention relating to the rights of children including its two protocols is representing an enormous advancement towards protecting the rights of the children.

A first international text legally persuasive in the field, the convention and its protocols impose obligations on the States which ratified them. Consequently, the states parties are required to respect and to enforce all the method’s which dedicate these judicial instruments. This implies that they respect the rights of the children, particularly across their institutions of protection and maintenance of childhood.

They also have to establish a protective border for all children on their territory, being part or not of this jurisdiction. This will assure the respect of all their fundamental rights.

In addition, the Convention has a monitoring apparatus, the Committee of the children’s rights, which has the mission to monitor the implementation of these texts by the States’ parties.

Therefore, the States’ parties must submit periodic reports to the Committee regarding the efforts taken to implement and provide the texts, as well as on the current situation and rights of the child in their country.

In concern for respecting the rights of the children while being transparent of the situation of the States, the committee examined in parallel the national reports and the reports transmitted by the national NGO’s.

The recognition of children as subjects of rights

The Convention concerning the rights of the child is the first international recognition that children are subjects of law and people with freedoms.

Until then, the principal documents protecting the rights of the child, such as declarations from 1924 and 1959, established rules for the children, but did not recognized them as individuals that were entitled to any rights.

The Convention also gives them an active role in determining their well-being and respecting their rights. Undeniably, as subjects of law, children have the right to express their opinion in all decisions affecting them and to participate in choices that concerns their welfare.

The interest of the child is no longer only appreciated from an adult point of view, but is coming directly from the standpoint of the child. The Convention highlights the fact that the welfare of the child can not be achieved without the involvement of the child in question.