Many countries in Africa, Asia, and the Middle East are plagued by war and other troubles, which displace and endanger millions of children. They are forced to move from their homelands to European borders in order to find safety. Displaced families are often separated, and they suffer extremely poor living conditions. Many children are orphaned and must afterward attempt to get themselves out alone.

Statistics on Children in the Refugee Crisis

In 2015, about 4.5 million children fled their country of origin in the wave of migrants trying to reach Europe via the Mediterranean. Children make up about one-fifth of the refugees in the European crisis. (Alameddine, 2015)
In 2015, about 337,000 asylum requests were filed for minors, of which 88,300 were unaccompanied minors. (Council of Europe, 2017). These children are fleeing unstable, war-torn countries that are no longer safe for them to live in. They come from Afghanistan, Syria, and Iraq, as well as African and Asian countries. Many of them have suffered psychological trauma within their countries, which is increased by the migration between their home country and wherever they are seeking refugee status.
Many children are forced to cross the sea in order to reach Europe, which unfortunately means that some drown. Between November 2016 and January 2017, about 190 refugee children died in the Mediterranean Sea. (UNICEF, 2017) This number is constantly increasing. Aylan, a Syrian child just a few years old who was found dead on a Turkish beach in 2015, is just one example. 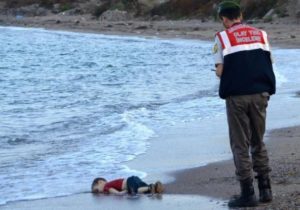 The majority of children entering Europe are unaccompanied, which increases the chances of them disappearing. In addition, many families are separated at the border of European countries. This affected about 3,500 children in 2013. Missing Children Europe reported 89,000 unaccompanied children in 2015, 10,000 of which had disappeared. (Boissieu, 2017)
In addition, because they travel alone, many children are not registered or reported anywhere, which means that their journey leaves no official trace and can never receive additional support. Refugee children can quickly fall victim to crime or human trafficking, since they are generally abandoned to their own devices and have to rely on themselves. Children lose their bearings and become easy prey, which leads to them being targeted by traffickers who can gain their trust quickly by offering them some semblance of protection, before forcing them into work. (Diffalah, 2016) 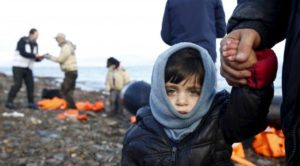 UNICEF has demanded action from the European Union in order to protect refugee children and guarantee them better living conditions. The dangers these children face—exploitation, rights violations, and drowning risks—must be alleviated. UNICEF has set up aid operations in order to provide humanitarian assistance to refugees, offering them enough to fulfill their basic needs. In February alone, 300 children were saved through UNICEF’s actions. (UNICEF, 2017)
In addition, the European Commission has invested 270 million euros to construct and maintain educational buildings for Syrian refugee children. Refugee children are often excluded from the educational system—about 400,000 do not currently attend school. (EU Logos, 2017). The goal is to provide the refugee children with an education, in order for them to better adapt and integrate into their new countries.