Bacha bazi: these seemingly unassuming words describe a contemptible tradition. The name comes from the Iranian and Afghan words for “playing with boys” and from the Persian for “pre-pubescent boy”. Dressed as women, wearing make-up, and with little bells on their wrists and ankles, the bacha bazi are young, poor, and pre-pubescent Afghani boys. Older men buy them, promising to teach them to sing and dance, and – almost always – with the aim of exploiting them sexually.

The men take advantage of the poverty in which these children and their families live, forcing the boys to dress as women and subjecting them to sexual abuse. Sometimes it’s just through fear for their own safety – fearing what would happen to them if they disobeyed or ran away – that these children comply. Bacha bazi owners have power and influence and often beat or murder children who don’t comply. In addition to the physical and psychological harm to which these young boys are subjected to, they are trapped by the taboo and cultural perception associated with the practice. 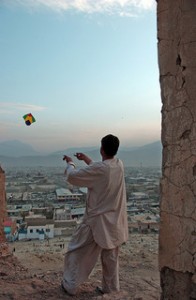 The practice of bacha bazi stems from an old Afghan tradition. Having once dried out, it has gradually re-emerged and has become socially acceptable in the country, particularly in the north. Having a ‘boy for play’ signifies power and social status. Men who are feared or who occupy powerful positions enjoy a form of ‘unofficial’ immunity; they often have many boys and let their friends spend the night with them. To find boys, these men either set up kite-shops, a traditional past time in Afghanistan or walk the streets hunting for a boy to prey on.

Although the practice is seen as being against both Afghan and Sharia law, the authorities turn a blind eye because of the influence of bacha bazi owners. While the UN, including UNICEF, have condemned the re-emergence of the bacha bazi tradition, Nazir Elimy from UNICEF explains, he “cannot name them [bacha bazi buyers] because [he] fears for [his] life”. Ms. Radhika Coomaraswamy, UN Special Representative for the Secretary-General for Children and Armed Conflict is among the few people who has stood up against the bacha bazi tradition; however, she has conceded that it is “not something you talk about”. Journalist Mr. Najibullah Quraishi condemned the situation in the 2010 report “The Dancing Boys of Afghanistan”, in the hope of breaking the silence and the taboo associated with the practice, a taboo that makes it all the more difficult to eradicate.