ISIS recruiting child soldiers at an alarming rate, what does this mean for the future of ISIS?

ISIS is coercing child soldiers at an accelerating rate recent analysis suggests. Disturbingly children appear to be fighting alongside adults marking a new development in the tactics behind child soldiers.

The deployment of child soldiers by militant groups

Violent extremist organizations (VEOs) all over the world have historically, and continue to, recruit child soldiers at an alarming rate. The Pakistani Taliban, the Houthi rebels in Yemen, and the Lebanese Hezbollah are just a few contemporary examples of rebel groups mobilizing child soldiers in order to boost military presence and circulate propaganda.

The UN officially defines child soldiers as under 18s recruited or used by an armed force in various roles; including as soldiers or for sexual purposes.  Child soldiers are traditionally conscripted in order to compensate for battlefield losses, or to incite profound psychological impact on the enemy who is not prepared to fight children. Also, VEOs often rely on child soldiers as subjects for their propaganda, which is more likely to grab global media attention. And ISIS is no different.

The Islamic State and the deployment of child soldiers 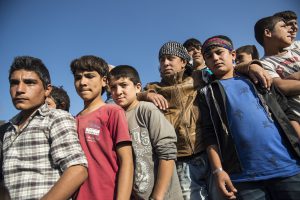 ISIS kidnaps, buys and enslaves children in order to coerce them to join the militant group.  For instance, the UN estimates that 800-900 children were abducted by ISIS in Mosul, Iraq in May 2015. Additionally parents are increasingly giving their children away to ISIS, arguably due to the aggressive ISIS propaganda encouraging children to become men and leaders of the next ‘generation’. In some areas of Syria and Iraq already under the state’s control, many university and high-school students are forced to pledge allegiance to the group on completing their formal education.  Once taken by the group children are put into religious camps, and those aged above 10 are put into military training. Dissidents can be beaten into submission, or killed.

Researchers at Georgia State University have analysed ISIS propaganda in an attempt to identify the nationality, age, role and cause of death amongst some of their child soldiers. The researchers confirmed the death of 89 boys aged 8-18 using the propaganda as evidence, of predominantly Syrian and Iraqi descent, between January 2015 and January 2016. A disturbing tactic noticed by the researchers is the use of children as ‘inghimasis’: people who attack a group of enemies before blowing themselves up; who make up 20% of the reported deaths.

Most notably, the data suggests that the Islamic State is assembling child soldiers on a far bigger scale than typical. Reportedly there were three times as many child soldiers in 2015 as in 2014. This disturbing tactic is most likely motivated by the goal of becoming a legitimate and permanent state, and so by indoctrinating new generations of fighters ISIS is potentially making it more difficult to be eliminated in the future.

The costs for children

The physical and psychological impacts of warfare on children are immense. The impacts of warfare can be eternally damaging for a child, caused by the cumulative impact of myriad traumatic experiences. Often child soldiers live in constant fear; they risk being raped, tortured or killed if they attempt to run away; and can become completely desensitised to violence through constant exposure.

Whilst in training ISIS leaders inspire hatred in the child soldiers – also known as Caliphate Cubs – for non-believers. This is a frighteningly effective tactic since children are still undergoing moral development, and thus ISIS can easily insight mistrust in the children for everyone including their own parents. Once fighting ISIS child soldiers appear alongside adults: a unique and disturbing trend that completely ignores the sanctity of childhood. Their ages are not mentioned in propaganda videos, suggesting that the organisation makes little distinction between child soldiers and ordinary ones. 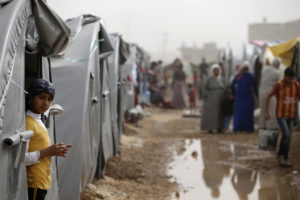 As soldiers young children miss their most crucial years in education making it extremely difficult to re-integrate into society after warfare without any skills, and encouraging further criminal or antisocial behaviour. What most concerns human rights organisations and NGO’s is the difficulty the international community may face in rehabilitating these child soldiers after life in ISIS since the tools usually employed – religion and family – have already been heavily distorted and manipulated by the state.

Unfortunately, as foreign and domestic military pressure on ISIS increases, we should expect further deployment of child soldiers. This extent of use of child soldiers is unprecedented, and makes it extremely difficult to predict the long-term, and global, implications of such wide-scale and enduring indoctrination.