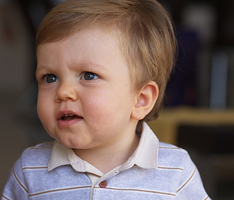 In Luxembourg, children represent a quarter of the total population. Whilst the country has ratified the International Convention on the Rights of the Child and most of its children have no problems, efforts still need to be made in specific areas concerning minors.

Luxembourg places great importance on integrating the children of migrant families into the school system in order to promote social cohesion. Schooling is obligatory for all children from the age of 4. This enables migrant children to benefit from this education and to learn Luxembourgish from a young age.

Luxembourg has three official languages : Luxembourgish, French and German. All three languages are taught in schools. Foreign children that arrive in Luxemburg at a later age do not have the required language skills and this prevents them from following the level of schooling equivalent to their age. Despite the efforts made to integrate these young foreigners, the learning of the three languages can be a factor of failure amongst migrant children.

The Judicial System for Minors

One of the key characteristics of successful judicial intervention involving minors is the rapidity of the judicial response. Young people do not have the same perception of time. As a result, when the justice system takes too long to respond to the offense they have committed, young people become less aware of the link between their act and the punishment later imposed. One of the major problems of the Luxemburg justice system as far as it concerns minors, is that the judicial delay is too long, which is not in the interests of the child.

The number of cases of mistreatment reported in Luxembourg is on the rise. In 2009, The Luxemburg Association for Childhood Mistreatment examined 184 situations of violence against children, compared to 163 in 2008. This augmentation is probably due to a greater public awareness of the structure, which in turn has led to a growing number of reports.

With 1,143 children placed in welfare institutions, in Luxembourgish host families or overseas in 2011, Luxembourg has one of the world’s highest rates of children in welfare. Since 2005 there has been a rise in requests to place adolescents in welfare. Such procedures can be put into question given that these decisions are directly taken without prior help being given or offered to families.

It is very difficult to find recent, reliable figures in relation to the rate of suicides, or attempted suicides. This problem seems in part to be linked to the precise definition of suicide. If, for example, a child is not hospitalized after an attempted suicide, but rather receives ambulatory help, they will not be counted in the statistics. The number of suicide attempts however is estimated at 700 individuals per year, amongst which adolescents feature the most prominently.

The strong level of CO2 emissions in Luxembourg is not without consequence on the well-being of its children. This air pollution can cause health problems, such as respiratory problems. Moreover, the government has not taken into consideration the impact on children in its measures to reduce the pollution.