Rekha Kalindi was 11 years old when the Indian president told her: “I am hopeful and sure that you will be an inspiration to other young girls. So that our country can eliminate this notion of marriage between two children at the cost of their education, their future and ultimately their happiness.”

Born on October 18, 1997 in a small, remote village where “when a girl is born, it is always bad news,” Rekha helped her mother with housework from a very early age and started working at four years old barely after a few months of schooling. In her region, the rate of literacy among women is one of the lowest in the country. 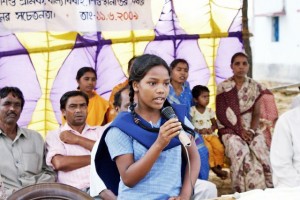 Battling against child labor, the National Child Labour Project (NCLP) – in collaboration with UNICEF – proposed schooling for Rekha in exchange for monetary compensation. In India, school is mandatory for ages 6 to 14 even though 12 million children leave to work. At school she learned that she had rights and that she wasn’t her parent’s property.

Afterward Rekha resumed the lifestyle of a young Indian girl, which included marriage around ten years of age. One night when she was only 11 years old her parents suggested that she find a spouse. Having helped her sister who – at 12 years old – was already married and had given birth to four still-borns, Rekha was terrified of the idea of marriage.

During a school performance in which Bengal’s Minister of Labor was in attendance, Rekha explained to the audience the virtues of school and then told the story of her sister and her own refusal to marry. Local journalists heard about this phenomenon and the speech received extensive media coverage. Back at home, however, Rekha’s mother beat her violently prohibiting her from returning to school and depriving her of food.

Only with the intervention of a teacher and the assistant to the Minister of Labor could she finally go back to school. Supported throughout the country, Rekha agreed – despite some threats – to write more speeches about child labor, the importance of education and forced marriages.

Today the story of Rekha Kalindi conveys a message of hope for numerous young Indian girls in countries where forced marriage between children remains a traditional and tolerated practice.