The situation for child feeding in the world

The right to food for children is recognized by the whole of the international standards relating to man’s rights and children’s rights. However, today, millions of children throughout the world suffer from undernourishment and malnutrition.

Causes of food insecurity in the world

Food insecurity in the world is the result of several factors. 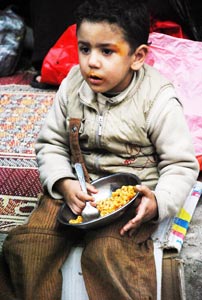 First of all, poverty, which is both a cause and a consequence of malnutrition and of undernourishment in the world. Individuals living in poverty seldom have access to available food because they have no financial means or do not have the possibility to produce their own supplies.

In addition, children’s malnourishment is also attributable to a lack of information on the daily needs essential to the physical and intellectual development of children.

Food shortage due to political and climatic instabilities 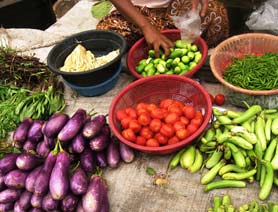 Food shortage is also a major cause of world hunger. Populations are facing a food deficit.

Stock or food shipping shortages are due to conflicts, wars and unusual climatic events such as droughts, fires and floods.

However, these factors generate food shortages and famines only in countries stricken by an extensive poverty and which do not have the financial means to recover from these disasters.

Present situation of the rights to food in the world

Today, more than a billion individuals, throughout the world, are exposed to problems of undernourishment. Among them, 800 million suffer from malnutrition.

Children are the primary victims of poverty and food insecurity 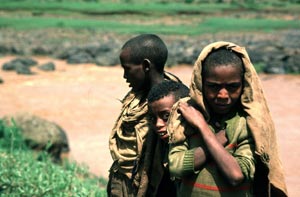 In developing countries, 146 million children under the age of 5 show a weight below the average. Meaning that one child out of 4 in the world is suffering from chronic or acute malnutrition.

Sub-Saharan Africa, South-East Asia, Eastern Asia and the Pacific are the regions the most affected by food insecurity. Infant mortality reaches new highs, notably in the region of Sahel, where 60% of those under 5 years old can clearly be linked to malnutrition.

Seriousness of the effect of food deficiency on children

The micronutrient deficiency kills or cripples a million children every year : over 500 000 children lose their sight due to a deficiency in vitamin A, 40 to 60% of children in developing countries suffer from mental retardation caused by iron deficiencies. Weakened by nutritive deficiencies, these children are vulnerable to infections and illness.

In addition, over 5 million children die every year due to malnutrition combined with inevitable illnesses (pneumonia, diarrhea, malaria, measles);  a child every 6 seconds.

Even though considerable progress has been made during the past decades to improve the worldwide food security, too many individuals still suffer from hunger and malnutrition.

Please see the sources used for the original version in French.