Right to Healthcare around the Globe

As we speak, the right to healthcare still isn’t a reality for millions of children around the globe, and more particularly in developing countries. Every year, over 13 million children under the age of 5 years die from illnesses which could have been avoided or treated.

The poor populations are most affected.

The poor populations are most at risk of food shortage, lack of drinking water, and of a proper sanitation system.

Therefore, these populations, and especially their children, are most likely to become ill.

Infectious diseases are all the more frequent and serious with children suffering from malnutrition and/or having no access to drinking water. Sub-Saharan Africa and South Asia are the most affected by this issue. In these regions, five countries; India, Nigeria, Democratic Republic of Congo, Pakistan and Ethiopia account for over half of children’s deaths worldwide.  This represents over 6 million child deaths.

Healthcare and medicine are prohibitive for millions of people.

In many countries the populations do not benefit from health coverage. Thus, they do not have access to healthcare that remains beyond their means. Some must save up for years before being able to see a doctor or a specialist.

Additionally, the large pharmaceutical companies because of their medicines’ extreme prices compound the precarious situation of the populations at risk.  These are the people most in need of the medicine.

As we write, over 1/3 of the world population does not have access to the medicines essential to their health and survival because of the high prices.

The failure of the healthcare system

In developing countries, vaccination levels are very low. In 2009, 24 million children from the poorest countries did not have access to the basic vaccines. Yet, the vaccination of these children could decrease the death rate of children linked to infectious diseases by 45%.

In addition, these countries usually don’t have enough staff and healthcare equipment to offer healthcare access to the most in need. The countries of Sub-Saharan Africa and South East Asia only count 1 doctor for over 2000 inhabitants; this is 6 times less than in developed countries. Additionally, care cannot be given to everyone and many children die because of a lack of health coverage or having waited too long before undergoing examination or vital care. 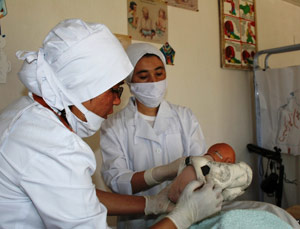 In poor regions, pregnancies and deliveries are often very risky for the mother’s and the children’s health.

Very few of them benefit from regular check-ups during their pregnancy and have no information on their health status and that of their unborn child. Any complication during the pregnancy, which could have been detected and treated with regular check-ups, can lead to the death of the mother and/or the child.

As we write, there are still 40% of mothers who give birth without any medical assistance. Furthermore, many die leaving behind a new-born who will be 10 times more at risk of dying before his fifth birthday.