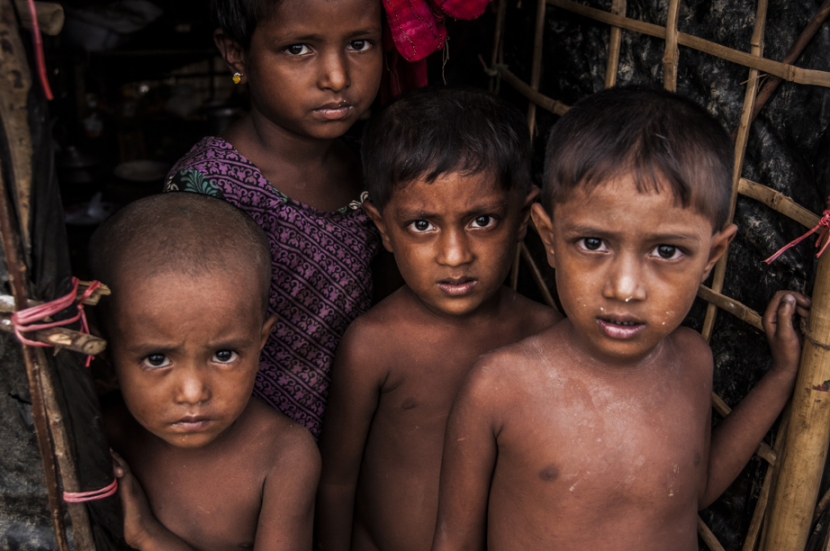 The Rohingya: “the world’s most persecuted minority”

The Rohingya, a Muslim minority from Rakhine State in Myanmar (also known as Burma), have faced persecution at the hands of Myanmar military since the country’s independence in the late 1940s. Effectively denied citizenship under the 1982 Citizenship law, they were rendered stateless, barred from citizenship and basic human rights such as the right to protection. Since the late 1970s more than one million Rohingya have fled Myanmar due to brutal military action. They have often been described as the “world’s most persecuted minority”.

The suffering of the Rohingya children

Since the renewed outbreaks of violence in August 2017, around 656,000 Rohingya have fled to Cox’s Bazar district in Bangladesh to escape targeted attacks and clearance operations by the Myanmar military. In this fast-growing humanitarian crisis, it is once again the children who are particularly suffering from the experienced violence and the living conditions in the refugee camps. Around 380,000 of the Rohingya refugees are underage and at least 30 percent of them are younger than five years old.

Around seven percent of the children in the refugee camps suffer from severe and life-threatening malnutrition. This number is three times higher than in other recent humanitarian emergencies. The overcrowded refugee camps, contaminated drinking water sources and the lack of medication supplies have led to a series of disease outbreaks. The Rohingya children are particularly susceptible to diseases such as measles, polio, diphtheria and other major childhood illnesses, especially since only as few as three percent of the children arriving from Myanmar are properly immunized.

Most of these children however above all, have experienced significant psychological trauma. Many have directly witnessed the loss of their parents and loved ones, or were direct victims of military raids, arson attacks, massacres, torture, forced disappearances, landmine blasts and sexual violence. Since August 2017 an estimated 730 Rohingya children under five years of age have been killed. Many have been separated from their families or fled alone. And the danger for young people does not end when they arrive in the refugee camps. Children and adolescents are especially vulnerable for human trafficking, sexual exploitation and child labour.

Without further actions, it is likely that another generation of Rohingya children will grow-up stateless, persecuted and deprived of basic children’s rights.

Responses of the international community

The UN Human Rights Council adopted a resolution condemning the ongoing violations against Rohingya people and other ethnic minorities in the country. The resolution was accompanied by a warning from the High Commissioner for Human Rights that recent military operations in Western Rakhine State could include “elements of genocide”.

On 23 November 2017 Bangladesh and Myanmar signed an “Agreement on return of Displaced Persons from Rakhine State” (hereinafter “Agreement”) on behalf of the “residents of Rakhine State”. It was agreed that Rohingya refugees begin returning to Myanmar starting 23 January 2018.

Donors and the international community should provide the necessary support to Bangladesh not only to allow refugees to live in safety and dignity, but also to ensure that the Bangladeshi government keeps its borders open to asylum seekers and respects the rights of refugees. The Bangladeshi government and their partners should set up programs to the Rohingya community, which incorporate protection measures such as long-term suitable accommodation, healthcare and psychosocial services.

Due to the critical flaws of the Agreement, Bangladesh and Myanmar should consider inviting the UNHCR to join drafting a new agreement. The current agreement fails to mention non-refoulement, the principle of international refugee law, that prohibits the forcible return of refugees to places where their lives or freedom would be threatened. Thus a central role for UNHCR is critical as they are the only UN agency with a statutory mandate to facilitate the voluntary repatriation of refugees.

Right to return must be fully respected

All returns must proceed in a safe, fair, dignified and orderly manner. Returns are only to be considered if Myanmar is willing and able to ensure full respect for a returnee’s human rights, equal access to nationality and security among communities in Rakhine State. Furthermore, special measures should be put in place for vulnerable groups, this includes people with disabilities, children, especially unaccompanied or separated children should receive adequate protection and assistance.

The 1982 Citizenship Law should be revised

The law should be implemented in a non-discriminatory and non-arbitrary manner. Conforming to international standards would ensure that every child born acquires Myanmar citizenship. As a party to the Convention on the Rights of the Child (UNCRC), Myanmar is obliged to ensure the implementation of every child’s right to acquire a nationality.

The Agreement makes no reference to the cause of forced displacement; campaign of killings, widespread rape and mass arson carried out by Myanmar security forces. Effective pressure from the international community on the Myanmar government is necessary to ensure that the UN and other humanitarian agencies have access to the areas of returns in Rakhine State and are able to provide humanitarian and development aid. Thorough investigations must be carried out in order to identify the root causes of this crisis.

How can you help ?

We believe in a world where children’s lives, needs and rights are respected, protected and fulfilled. Your support is needed to help the Rohingya children and their families.

Friendship is a Bangladeshi non-governmental organisation that has been helping poor people in remote and unaddressed communities in Bangladesh since 1994. Particularly involved in Cox’s Bazar refugee camp, they are setting up medical clinics and birth centers, installing water wells, latrines, bridges and solar-powered lighting (especially for the safety of women and children). They are also building social areas to help victims of violence overcome their trauma. Support Friendship and make a difference for Rohingya children and their families in Cox’s Bazar’s refugee camp (Reference Friendship).

UNICEF (January 2018). Half a million Rohingya refugee children at risk in overcrowded camps in Bangladesh. Retrieved from https://www.unicef.org/media/media_102462.html