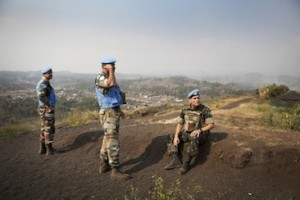 As a reflection of the changing political climate in the Democratic Republic of the Congo (DRC), in July 2010 the UN revised its mission for the region. To keep the peace at the local level, UN Peacekeepers, or ‘blue helmets’, are permitted to use whatever means necessary to protect civilians, humanitarian aid workers and human rights defenders.

Instability in the DRC:

The Great Lakes Region has suffered waves of violence against Congolese civilians, which can only be brought to an end by a new political focus.
In addition, the High Commissioner for Refugees is concerned by the rise in sexual violence which has come to light in North Kivu, where women and children are the victims of abuse and ill-treatment.
MONUSCO is equally alarmed by allegations of murder, forced labour and the arbitrary imprisonment of civilians by the March 23 Movement (M23), which holds the region in a vice-like grip.

While the region is far from stable, UN workers hold great hopes for the future peace of the country.