The Right to Water Around the World

Today, more than 885 million people worldwide are forced to drink water which is unsafe for drinking. More than 2.5 billion people, which is close to 42% of the world’s population, do not receive water treatment services.

Water and children’s health around the world

The lack of safe drinking water is a tragic reality for millions of children in developing countries. Their health and quality of life are seriously affected.

Each year, 1.8 million children under the age of five die because of illnesses related to unsafe water. One child dies every 20 minutes.

The most affected regions are subsaharian Africa and south-east Asia where 40% of the children must drink water which is not safe for consumption. 65% of them do not use proper toilets. More than one out of five people is obligated to defecate outside. This creates water and land pollution and leads to serious illnesses.

The impact on children’s health

• Every three minutes, one child dies of diarrhea-related illnesses.

• Tuberculosis, which was once considered obliterated, still exists. 120,000 children die of tuberculosis each year.

• 88 million children under fifteen get schistosomiasis each year. This is caused by parasitic worms which develop in stagnant water. 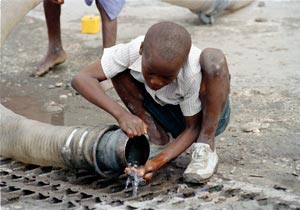 • Educational campaigns about hygiene could reduce the number of diarrhea-related illnesses by up to 45%!

• Access to safe drinking water could reduce the number of children’s deaths by 50%!

The impact on children’s education

The lack of drinking water and proper sanitation facilities have additional consequences; in some developing countries more than half of all primary schools do not have the facilities to provide drinking water. Two-thirds of schools are not equipped with sinks or toilets. Also, millions of children, especially girls, cannot go to school on a regular basis due to the lack of hygiene.

Each year, 443 million schooldays are missed because of insufficient facilities, illnesses and lack of hygiene. The school attendance rate is lowest in subsaharian Africa and south-east Asia. These places also have the highest number of uneducated girls because schools lack suitable girls-only washrooms.