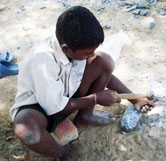 As June 12th is the World Day against Child Labour, our organization Humanium would like to recall the issue of child labour in India.

60 million children work in India and 10 million of them work in slavery.
The Indian Ministry of Labour’s official figure for total child workers is 12.6 million. According to the United Nations, child labour contributes to 20% of India’s GDP—India has the highest proportion of child manpower in the world.

Why do so many children work in India?
– Poverty is the main cause of child labour;
– These children attempt to meet their basic needs ;
– They are docile and lucrative workers.

What type of work do they do?
Children work in several sectors such as industry, agriculture, brickyards, workshops and factories (especially as weavers). They also shine shoes or work as street vendors or domestics.

What are their working conditions like?
Children work without any real salary, without a contract and without any rights :
– They may work for 15 hours or more per day ;
– They earn very low wages ;
– They may not be paid for their first three years of work, which is considered to be a training period ;
– They may be victims of violence (may be beaten, tortured, imprisoned, deprived of food…) and are sometimes chained to their weaving looms so they cannot run away.

How does the Indian government fight against child labour?
– Child labour has been banned in India since 1986. This law is not respected, as we can see from the large scope of the problem.
– The minimum legal age to work is generally 14 years old.
– According to the law, a child’s employer could face a prison sentence of three months to one year or a fine of 10,000 to 20,000 rupees (200 to 400 US dollars or 150 to 300 pounds).

How can we help these Indian children?
By supporting Humanium, you can make a difference in the fight against child labour in India:
– Sponsor a child in India
– Make an online donation.

Another interesting article:
Raising awareness of the negative effects of child labour.