While many may think of children’s rights violations occurring in the poor, war-torn countries of the world, children in the United States suffer from certain encroachments on their rights as well. The United States is the only nation in the world that has not ratified the United Nation’s Convention on the Rights of the Child (UNCRC), a document drafted in 1989 that serves to protect children’s rights through government action.

Countries that have ratified the UNCRC are in green: 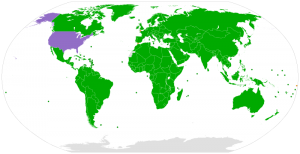 There are numerous reports of children injured when using sharp tools, heavy machinery in their jobs – and almost no children interviewed by HRW had health or safety training or protective gear. 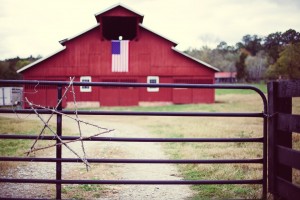 Data from the US government illustrates that agriculture is the most dangerous industry for young workers – In 2012 there were more than 1,800 nonfatal injuries to children under 18 working on US farms, and two thirds of children who died from work injuries were agricultural workers.

Why are these children not protected by US labor law?

Laws in place allow children working in agriculture to work longer hours, at younger ages, in more hazardous conditions than in any other industry. With parental permission, children as young as twelve can be hired for an unlimited number of hours (outside of school hours) on a farm of any size. There is no minimum age for children to work on small farms.

Children at age 16 can work in jobs deemed “hazardous” by the US department of labor in agricultural settings – but in other sectors, workers must be 18 to do hazardous work.

In 2011, federal regulations were almost passed that would have restricted workers to be 16 or older to work on tobacco farms – however, with the influence of Big Agriculture, these regulations were withdrawn.

There is no place more toxic for children workers in the US than tobacco farms, where children are not only exposed to pesticides and heavy, unsafe machinery, but also the nicotine of the tobacco.

Several hundred thousand children work in US agriculture every year – but there is no data on exactly how many work on tobacco farms. Most children make only minimum wage – others report being paid less than minimum wage, with no overtime. 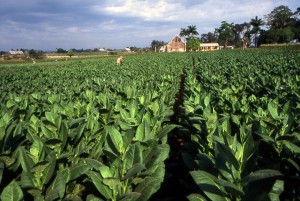 n interview by HRW, many children reported that they started working on tobacco farms at age 11 or 12 during the summer months, in order to help support their families. The majority of these children are the sons and daughters of Hispanic immigrants.

Tobacco farms are particularly dangerous to children as they are exposed to nicotine and the toxic pesticides often sprayed in the air to protect the plants. There have been reports of children suffering from vomiting, nausea, headaches, and dizziness – the symptoms of nicotine poisoning. Nicotine is absorbed through the skin while these child laborers gather and handle tobacco leaves.

In this sector, children have also reported to work long hours (50-60 hours each week) in the extreme heat with little or no shade, no sufficient breaks, and little or no protective gear.

The pesticides used on many tobacco farms are also extremely dangerous to children, as they contain neurotoxins that can alter the nervous system and lead to long-term negative health effects, such as cancer, learning and cognition problems, and reproductive health issues. Exposure to pesticides and nicotine is particularly dangerous to children because their bodies and brains are still rapidly developing and growing.

Law dictates that one cannot buy tobacco until the age of 18, but children throughout the southeast – where 90% of the tobacco is grown in North Carolina, Kentucky, Tennessee, and Virginia – work legally on tobacco farms starting at very young ages.