Many little Saudi girls probably hear this phrase every day. In their country, they do not enjoy all of their basic rights and are subordinated to masculine authority on a daily basis.

For example, women do not have the right to travel, work, drive, or, sometimes, even be operated on without the permission of a male guardian (often a male member of the family, the father or a brother, for example).

In 2013, according to a ranking table on the differences between the sexes drawn up by the World Economic Forum, Saudi Arabia came 127th out of 136. This is clearly not a very respectable position, but the country can do better. And it does. 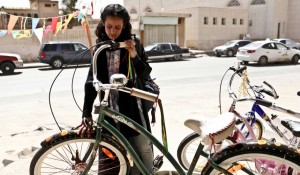 Following the international plebiscite on the film Wadjda, which tells the story of the day-to-day life of a young Saudi Arabian girl with one dream – to be able to ride a bicycle -, the Saudi religious police have decided to relax their policies towards women. Now they can dare to ride a bicycle or a motorbike, but on the condition that they are accompanied by a man and are wearing a full-body covering veil (burka).

In 2013, Saudi Arabia entered into what can be considered a historic agreement, given the conservative nature of the country. The Kingdom of Saudi Arabia approved a text that aims to combat acts of violence against women and girls.

One clause stipulates that violence towards women cannot be justified on the grounds of “any custom, tradition or religious consideration”. This approval supports the 70% of the Saudi population interviewed by the National Family Safety Program, who believe that domestic violence is too common in Saudi Arabia.

In 2011, King Abdullah personally announced that women shall have the right to vote in 2015. They shall also be able to run for a seat in the Majlis al-Shura, the Consultative Assembly of Saudi Arabia.

Now, we must hope that the seeds of change sown by the King do not grow in a fertile soil of… conservatism.