Located 200 km from Dakar in Senegal on an island in the Saloum Delta is a quiet village called M’bam. With its narrow streets, its small thatched-roof mud houses, a scattering of trees, and especially children, busy talking and playing on the way to school, it is a village like so many others in Africa.

It was in this small village and for these children that Humanium decided to support the World Wide Watch project. The project, planned for a six-month period, consisted of building a school, including both a preschool and an elementary school in two classrooms.

Access to education was the priority in this village, as 30% of children between the ages of 3 and 6 do not attend school because their parents cannot afford to send them. There is a school which welcomes around 100 students, however, the high cost of paying the teacher, which is around 1000 CFA francs per month (1,52 €), effectively discourages access to education for children from disadvantaged families. 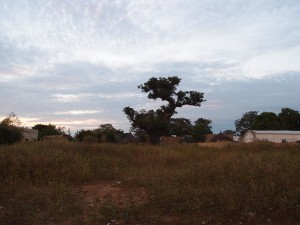 World Wide Watch was developed based on the initiative of the parents and the village chief. Community involvement was reinforced with the provision of 1400 m² of land to complete the project. Building the school is the first phase of a program aimed at sustainable development as well as public awareness of environmental problems. The plan includes the installation of solar panels as well as the drilling of a well.

Moreover, this project will reinforce work which has already taken place. April 2013 marked the opening of a library which is currently being run by the children.

Over time, the whole life of the community of M’bam is set to change, with every resident taking part in the activities. The school will play a role in this evolution, acting as a place for sharing information. There are plans to organize evening programs there for the villagers and their children (such as movies and awareness programs).

Through your contribution, you can help Humanium improve access to education for the children of M’bam.