As our world becomes increasingly globalized and it becomes easier to navigate borders, many nations are struggling to incorporate foreigners into their population – while others appear to be able to do this effortlessly. In 2015, 1.1 million asylum seekers arrived in Germany – about 40% of which were children of school-age. For many of these immigrants, attending school is a great challenge, linguistically, culturally, and logistically. 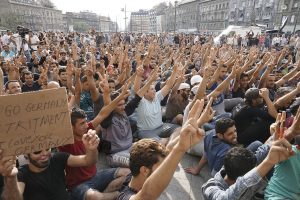 The German education system is consistently ranked as one of the best in the world. While policies differ from state to state, children generally start school (1st grade) at age 6. Before this, public preschools care for children ages 1-6 in a typically non-academic setting. Primary schools in Germany are usually only open for half days – which is not ideal for immigrant children who would benefit from a full-day immersion into the German language and culture. For many immigrants and refugees in German primary schools, they spend only a few hours surrounded by native Germans.

Around age ten, students in the German system are tracked into either vocational or academic secondary schools. Statistics show that immigrant children are 44% more likely than native-born Germans to attend vocational schools. This tracking system makes it very hard to integrate older immigrant children, who may have the academic capacity to succeed in the university-track but lack language skills. While movement between schools is possible, it is often difficult. For this reason, native-born Germans are much more likely to attend university than those with immigrant backgrounds. It is clear that the German system has had troubles educating immigrants even before the recent influx of refugees: in 2012, immigrants in Germany scored 61 points lower (on average) on the PISA (Programme for International Student Assessment) exam than their German-born peers.

Only 8% of university students have an immigrant background.

Integrating refugees into the system

Asylum seekers, by the nature of their departure from their home, often enter Germany unsettled and disorientated after their (commonly) dangerous journey. Post-traumatic stress disorder, shock, and trauma are not uncommon among children and adult refugees. Before leaving their home for Germany, many children’s education would have been disrupted by war. Schools are one way that children can feel a sense of normality, structure, and order in their life.

In order to welcome refugees into the education system, Germany has hired over 8,500 new teachers, some specifically to teach German as a Second Language courses. The federal government has also increased funding to all state education systems. In order to provide appropriate services for these children, schools must also hire translators, psychologists, and social workers at the school and state levels.

In many states in Germany, particularly Bavaria and Berlin, children of asylum seekers are offered transition courses, or Willkommensklassen, to help them become accustomed to the language and culture and not struggle in regular classes taught in German. While this certainly has its advantages, this also segregates refugees from their German peers. A relationship with native peers can help immigrants learn the language and culture faster, and feel more welcomed and integrated into society.

One main problem of educating refugees and immigrants is that they tend to be concentrated together – with 60% of immigrant students in Germany attending schools where at least half of the population are also immigrants. This partial segregation means that students are less likely to learn the language or feel integrated. 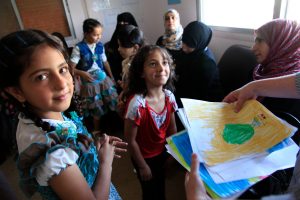 If children thrive in school, it betters their family’s long-term chances of thriving. However, a stressor for children may arrive out of this, as they become “spokespeople” for their family if their parents do not speak German. This can change the family dynamic and disrupt relationships.

With Germany’s low birth rate (the lowest in the world), the nation needs migration – especially of young people able to work. The nation must make sure to welcome immigrants and refugees as opportunities for growth, not as problems.