Effect on children to an exposure to the Justice system

The effects of such an exposure mainly concern children in conflict with the law and deprived of their freedom (see the focus on detained children for more information on the effects of detention).  They also affect children who are victims or witnesses to a crime. Exposure to the justice system can be a new traumatic experience for these children. 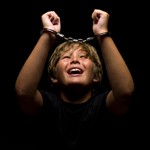 If personnel in the justice system are not trained to correctly treat children the child may become uncomfortable, frightened, or may even be placed in danger. They can also feel that no one is listening to what they are saying, or worse, that no one believes them, and they may become disheartened. In fact, children who no longer trusts the justice system of their country is more likely to become delinquent.

Decisions rendered by the justice system, whether or not they are fair, will change a child’s future. If they are sent to prison and their specific needs are not considered, their life will be turned completely upside down, or even destroyed. If, on the other hand, a child receives help or some sort of compensation, they can escape from a difficult life.

Also, if a child’s anonymity is not protected, those who are accused of crimes (whether or not they are actually guilty) can be badly viewed by society, which will always consider them as delinquent. Children who serve as witnesses can be threatened by those they are testifying against.