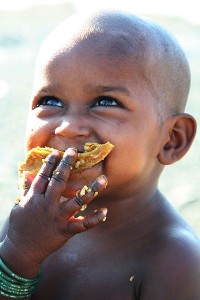 Childhood nutrition should be a balance between the high energy and nutrient content required for growth and development, and establishing a healthy diet which will not lead to obesity. The balance between these two aspects shifts over the years, moving from the very high fat content of an infant’s ideal diet to the low-fat, high-fibre diet of adulthood. Indeed, by the time we reach adulthood, the majority of our growth and development will be well and truly over, meaning that nutritional priorities should shift to maintaining a healthy and active lifestyle into old age.

Unfortunately, many people all over the world are not getting the right nutrients. In wealthier nations like the USA, malnutrition is the result of people eating a diet in which certain nutrients are either lacking, or are present in excess or in the wrong proportions. Such unhealthy diets contain too many fats and refined carbohydrates. The increase in the incidence of obesity is the result of people eating the required amount of calories, but derived from food which is lacking nutrients – fast food being the prime example. At the opposite side of the spectrum, undernutrition signifies an inadequate intake of nutrients. Extreme undernutrition equates to starvation and its symptoms and effects are inanition ̶ exhaustion resulting from lack of food. This is mainly apparent in less-developed countries where there is not enough food, and where the food available is of poor quality and lacking in variety.

The response to undernutrition is getting both better and faster as food distribution schemes expand and become more efficient. Other efforts are also tackling the crisis. For example, in the Central African Republic, ongoing projects are distributing seeds for local people to grow their own food, leading to a sustainable and long-term solution. This is particularly effective in rural Africa where food distribution is difficult because of bad access for trucks. Similarly, UNICEF has responded to the crisis with cash transfers – small, predictable sums of money given to extremely poor families in Eastern and Southern Africa to alleviate household poverty. This is a faster and easier way of distributing food aid. Another response was the creation of ‘Plumpy Nut’, a high-energy, peanut-based paste which was first trialled during the famine in Niger eight years ago and is now reaching two million of the world’s most severely undernourished children a year. Its ingredients include skimmed milk powder, sugar, vegetable fat and vitamins and minerals. With initiatives like these, we can hope that someday soon, everybody, everywhere will be getting the right nutrition.