Optional Protocol to the Convention relating to the Rights of the Child, on the involvement of children in armed conflicts, 2000

Introduction of the Protocol

The optional Protocol on the involvement of children in armed conflicts was adopted on May 25, 2000, in New York, by the General Assembly of the United Nations.

The civil conflicts of the 1990 years, notably in the region of Sub-Saharan Africa (Liberia, Sierra Leone, Rwanda, Burundi, Somalia, etc.) were marked by the massive usage of children in battle by the armed forces.

It is a new category of fighters that appear: children-soldiers. Throughout the world, the pictures of these children with weapons of war, were at the origin of a conscious awareness and generatedthe indignation of the international community that then hastened to react.

If the children are the object of a special protection in the Geneva Convention of 1949, the case of children-soldiers was not treated, leaving a legal void in this area.

It is the ILO that will be the first organization to react, in the Convention 182 on the Worse Forms of Children Labor, while defining the recruitment of children in the armed conflicts as one of the worst forms of exploitation.

Afterward, the Security Council of the United Nations will adopt several resolutions denouncing children labor in armed conflicts and characterizing these grave acts of violation of human rights (1).

The authors of the international Convention relating to the rights of the child of 1989,also evoke this problem in Article 38 of the Convention. Nevertheless, the recruitment of children is not prohibited. The convention simply foresees the possibility to recruit children in armed conflicts, with the only condition that they are more than 15 years old:

Moreover, to compensate for this gap and to rectify this Article, the United Nations decided to adopt an optional Protocol to the Convention, concerning the involvement of children in armed conflicts.

The Protocol is adopted May 25, 2000, alongside the optional Protocol concerning the sale of children, the prostitution of children and pornography exhibiting children. This protocol will become legally binding on February 12, 2002.

What is in the Protocol 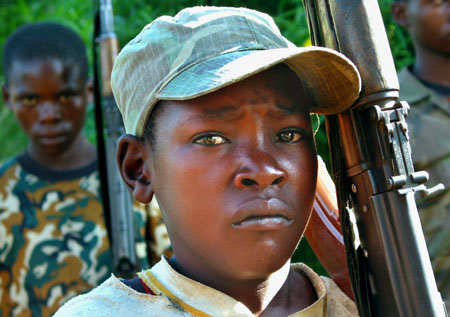 This protocol reminds you that the children have neither the maturity, nor the necessary physical and mental development to understand the seriousness and the consequences of their enlisting in the armed forces.

The protocol condemns the phenomenon of children-soldiers and gives a very wide definition of this expression in order to be able to protect the largest number of children involved in armed conflicts. According to the protocol, a child-soldier can be a sexual or domestic slave, a cook, a sentinel, a minor or mines remover… recruited by force or voluntarily.