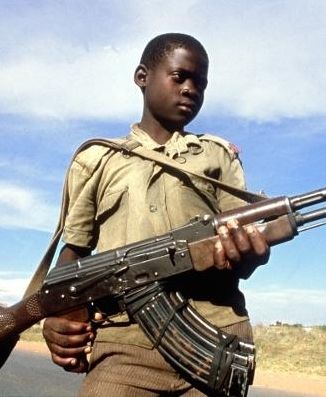 Today, there are between 250,000 and 300,000 children fighting in the world. Their recruitment begins from the age of 10. Child soldiers are used as instruments in war machines that execute even parents and friends.

“Children, my dear brother, are the best fighters of the century. They have more energy than older people. They resist without feeling physical pain.”

Lucien, 12, ex child soldier from the Democratic Republic of Congo (1)

“At our age, , it’s more complicated for the rebels. So they use stronger stuff, like drugs or money, to bait us and to make us march…I remember the attack on Njola-Kombouya village, in the south of Sierra Leone. They made us wake up at 1 in the morning and we marched until 7. A doctor came. He had a small bowl of cold water, and, every two injections, he rinsed his needle in the water. It was always a small vial with red liquid. At first, I constantly felt weak and then after, I had a sense of overwhelming power, I felt myself capable of anything…I had rage, hate, I wanted to destroy everything. You can’t understand, we were placed in such a state that we laughed in face of all that violence, we found it exciting, we had no limits.”

A child soldier is a human being less than 18 years old, recruited by an army or simply participating in an armed conflict.

In certain societies, children are considered adults from the age of 14 or 15. A young person of 15 who joins an armed group can therefore be considered as an adult soldier according to his own culture. Current international law in force fixes 15 years as the minimum age for recruitment in the army and participation in conflicts. However, the International Convention on the Rights of the Child fixes 18 as the age of adulthood. 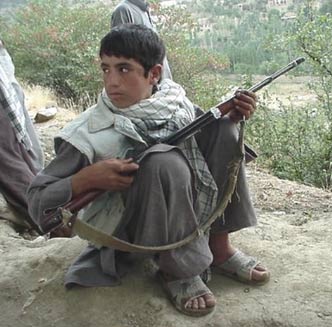 The role of child soldiers

A child soldier is not only a member of an armed group who actively participates in hostilities. A child soldier does not necessarily wear a uniform or carry a weapon: he can be recruited into an armed group as a cook, carrier, guard, spy, messenger, bodyguard, sex slave, mine “detector”…

Children are recruited because they are more manageable, more obedient, and more easily manipulated than adults. Children are also less conscious of danger, and it is harder for them to see the difference between “absence” and “death”.

Combined with questions of poverty, the lack of access to education or training, discrimination, and vulnerability, children are easy targets for recruitment by armed groups. Children who are orphaned, unaccompanied or living in a difficult family environment, see it as a solution to their problems, and taking part in an armed group seems safer than confronting these problems. Revenge, community identity, and ideology can also influence children.

Armed groups often target children because they “cost less”: the necessary investments for recruiting, training, and arming children are less than for adults.

What’s more, today children are generally recruited in civil war environments, which are long and cause heavy casualties. As a result, children replace adults dead in combat.

Recruitment of child soldiers is mostly voluntary, due to a combination of the multiple motivational factors mentioned above.

However, forced recruitment is a common and carefully planned process in which children are abducted and tortured. In cases of forced recruitment, the recruiters typically target places where children are most vulnerable and gathered in large numbers: in particular, children are abducted from schools, orphanages, refugee camps, stadiums, and churches. Children are gauged according to their height and physical condition. To subdue them, recruiters don’t hesitate to rape, beat, and torture them, and even to kill members of their family…when they aren’t required to do it themselves.

“They give you a firearm, and you have to slaughter your best friend. They do that to see if they can trust you. If you don’t kill, your friend is ordered to kill you. I had to do it, otherwise I would have been killed. That’s why I left. I couldn’t handle all that any more .”

Colombie, boy recruited at 7 by a paramilitary group when he was a child in the streets. (3)

Child soldiers are usually presented as victims of adults, and forced recruitment is more readily emphasized than voluntary engagement. However, the majority of children choose to become soldiers and are real players of the conflicts.

The taboo of child soldiers for armies and the simplistic vision of the phenomenon in public opinion is a major challenge in resolving the problem, because it tends to want to grant a certain immunity to child soldiers, without accounting for the complexity of the problem and the conscious will of the child soldiers.