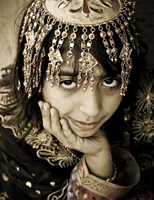 Currently, Qatar’s oil and natural gas resources allow Qatari to live comfortably. Concerning children’s rights, although the situation seems to be improving, it remains difficult to determine, with accuracy, the progress that has been made due to a lack of data about child labor and violence towards children.

80% of Qatar’s population is made up of foreign workers coming mainly from Southern Asia and the Middle-East. While both the Qatari constitution and Sharia law prohibit discrimination between races, children of migrant workers are victims of discrimination in the areas of health and education.

Gender discrimination is also rife in Qatari society. For example, when one parent dies, young Muslim girls receive a smaller inheritance than their brothers.

Although Qatar has established a law forbidding corporal punishment in school anin criminal justice, this practice is still allowed at the family level. Some parents think that it is a necessary measure for educating their children.

Despite the fact that the rate of arranged marriages is declining in Qatar, there is still concern over child marriage. The minimum age of marriage for a girl is 16 years while for boys it is 18 years.

This differentiation shows that the principle of nondiscrimination of the sexes is not respected. One of the major risks of these unions is domestic violence towards young girls.

A number of countries exist where female genital mutilation is practiced. Qatar is one of the 6 countries in the Middle East where circumcision is still carried out. This practice has severe consequences on the health of little girls, and could be a source of major trauma.

Qatari children have the right to a free education from ages 6 to 14. Public schools exist which allow this access. 98% of children are enrolled in primary school.However, as education is not obligatory before and after primary school, this leads to a weak education rate notably among girls.

Qatar works towards improving the living conditions of its children and developing structures in order to respond specifically to their needs. For example, the Shafallah Center, created in 1999,welcomes handicapped children from an early age until adulthood. The Center supports these children in their education and their personal development.

Although the prohibition of corporal punishment in response to an infraction committed by a minor is a huge step forward in child justice in Qatar, a child is considered criminally responsible at the age of 7. This minimum age is relatively low, even more so as a child’s word is rarely taken into account during legal proceedings.

While the Convention on the Rights of the Child recommends a differentiation between the handling of minors under the age of 18 and adults in criminal matters, children from 16 to 18 can be treated in the same manner as adults in Qatar. According to Sharia law, flogging is authorized for children older than 16.

Previously, mainly African children were sold or kidnapped in order to become camel jockeys. This practice put minors at risk as they were often underfed, worked in miserable conditions, and their health was put into jeopardy.
Since 2005, Qatar has introduced a law in order to forbid child camel jockeys, and robots have been created to replace them. Child labor is forbidden for those who have Qatari citizenship, however foreign children remain very vulnerable.

Traffic accidents are one of the causes of child mortality in Qatar. Compared with countries of similar wealth, Qatar has the highest accident rate. Awareness programs on road safety have been implemented but with yearly increases in the number of vehicles on Qatari roads the potential for a worsening of the child accident record is troubling.