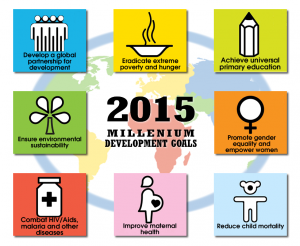 On September 8, 2000, over the course of the “Millennium Summit,” eight goals (MDG) were rolled out and adopted by 189 nations. These eight goals set were:

These goals constitute an unprecedented plan in the global fight against poverty; the target set for their achievement is by December 31, 2015.

“The Millennium Development Goals have been the most successful global anti-poverty push in history,” declared the Secretary-General, Ban Ki-moon. “The MDGs have proven that focused global development objectives can make a profound difference.”

Goals fulfilled before the deadline

The Food and Agriculture Organization of the United Nations has announced that, according to its predictions, 38 countries will have fulfilled their goals for the eradication of hunger before the 2015 deadline. As for persons living in extreme poverty, the proportion was reduced by half on the global scale, five years earlier than projected.

Concerning access to potable water, 89% of the population gained access in 2010, achieving the stated objective five years in advance.

The fight against malaria and tuberculosis has likewise seen remarkable progress; but this is not the case with all the MDGs.

Goals far from being achieved

Progress for some Millennium Development Goals has faltered, or for some there has been a reverse in advances. These include access to primary education, notably for the poorest children, as well as access to anti-retroviral therapy or even advances in sanitation methods, where considerable advances have been made, but cannot yet be considered sufficient to reach the 2015 goals.

“Successful completion of the MDGs by 2015 must remain a global priority, creating a stable foundation for future development action,” concluded Wu Hongbo, Deputy Secretary-General for Economic and Social Affairs, in his overview for “The Millennium Development Goals Report 2013”.