Sexual violence is a common tactic during armed conflict. Examples of which can be seen during the conflicts in Bosnia, the Democratic Republic of the Congo and Sierra Leone. No matter where the conflict occurs, sexual violence frequently follows, targeting not only women, but also young girls, boys and men. 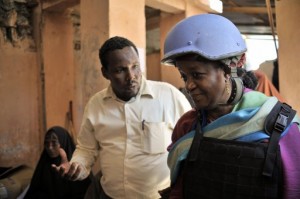 Often denied by the authorities and hidden by victims, these acts of violence cannot be taken into account by the international community until much later. In fact, it wasn’t until 2010 that Ban Ki-Moon appointed the first Special Representative for acts of sexual violence committed in times of conflict.

This is a big task, as the violence often continues even after the conflict is over, therefore as Zainab Hawa Bangura, the current Special representative explains: “It is not enough to physically disarm the combatants, they must also be disarmed mentally.

Because experience tells us that after a war there is generally a rise in the number of rapes at the community level”.

The Special Representative identifies six objectives by which to combat the scourge of sexual violence: