Since its creation in Sweden in 2000, the World’s Children’s Prize has awarded thirty laureates for their distinguished work in the fight for the Rights of the Child. 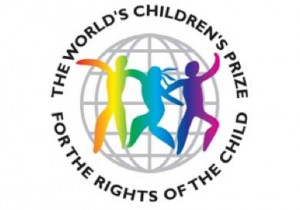 An initiative to promote the Rights of the Child

Chosen by a jury composed of children, the three nominees are decided between by the votes of millions of children around the world. These children are knowledgeable about the nominees fight for the rights of the child thanks to a training program supported by 57,000 schools, or about 27 million students in 107 countries. These universal education programmes are being offered to a growing number of children.

They promote the protection of children’s rights and establish an overview of the situation in each country, through testimony of those principally concerned.

The World’s Children’s Prize was awarded in 2012 to Anna Mollel, for her work in association with Huduma ya Walemavu which has fought for twenty years for the right to dignity for handicapped Massai children in Tanzania. The vote for the 2013 award will be held on the first of October to decide between James Kofi Annan, Sompop Jantraka, and Kimmie Weeks.

Portrait of the nominees for the 2013 award

Former child slave, James Kofi Annan is nominated for the work of his organization Challenging Heights against child slavery. More than 500 child slaves have been freed thanks to his association which also manages a school of 700 students. The education serves to aide in the fight for the rights of the child.

In this same perspective, Sompop Jantraka fights against human trafficking, against the exploitation of children in the sex industry, and against all forced and hazardous work. Thousands of children have been educated and have escaped human trafficking under the Development Education Programme for Daughters and Communities acting in the Mekong region.

As for the final laureate, Kimmie Weeks, his organization The Voice of the Future works for the disarmament of child soldiers in Liberia, Sierra Leone, and in Uganda. More than 20,000 child soldiers have been removed from armed forces because of the actions of this association.

Influenced by their personal history, all three have acted effectively to protect the physical and moral integrity of children. More than an award, this prize highlights the struggle of men and women willing to defend the rights of the child and reveals the work that lies ahead in this area.