Street children in Morocco number approximately 30,000, a frightening statistic when you are aware of the damage such circumstances inflict upon children’s development and future. Living in poverty and outside the school system, these children are easy targets for urban violence and all kinds of traffic, whether drugs or sex, and have a future as dark as the streets they live on. 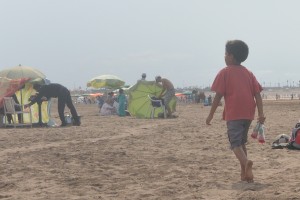 In Casablanca, the biggest city in Morocco, approximately 7,000 children live in this condition. The chamkers are children who were abandoned or chose to flee their sometimes violent and often difficult family environments. While some of them work in the streets during the day and go home at night to sleep, others make an uncomfortable bed for the night out of a simple cardboard box or staircase step.

In the streets of Casa, the country’s economic engine, which employs over half its population, street children sell small merchandise and basic services to pedestrians and motorists alike.

This social trend is not unique to Casablanca. In Marrakech, one of the biggest souks in Morocco, the millions of tourists aren’t pounding the pavement alone – street children have also set up house there. Sometimes organized in clans, they earn a few cents in the vicinity of the famous market by selling packets of tissues, tourist guides and other products.

With a few Dirhams, these children can buy drugs. To alleviate the stress of their daily lives they often sniff glue, a cheap and easy-to-obtain drug, or other hallucinogenic substances. The exact number of street children in Casablanca, Marrakech and elsewhere is difficult to establish due to their mobility. According to the Moroccan Ministry of Solidarity, Women, Family and Social Development, the number fluctuates between 10,000 and 30,000.

However, the source of this problem is easier to pinpoint: the poverty and unemployment affecting numerous Moroccan families and the lack of care and affection given to certain children in the family environment are some of the factors that force children to live on the streets.

A dash of color on a dark canvas: Moroccan civil society, represented by non-governmental organizations and associations, is trying to come to the aid of these children. Occasionally, at the government’s initiative, welcome centers have been opened and strive to reintegrate street children into the school system, a family, and society as a whole.

However, the number of children to care for is too high compared to the infrastructure and qualified personnel dedicated to the cause. Moreover, it is not easy to establish trust between the social and educational agents and the victims; the children, abandoned by their family and rejected by society, have lost all trust in adults and all hope for the future.

Nevertheless, we must safeguard their fundamental rights and, above all, their right to childhood.