Obesity among children is one of the biggest challenges for public health in the twenty-first century. While 66 million school-aged children suffer from hunger, 43 million preschool-aged children are obese. If this trend continues, it’s expected that by 2020, 60 million preschool children, 9% of children in the world, will be obese or overweight. The prevention of childhood obesity must be a top priority on the familial, national and international levels. 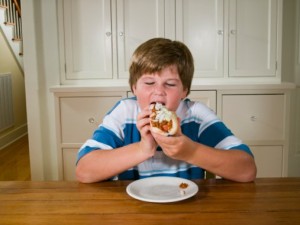 The Causes of Childhood Obesity

The main cause of overweight and childhood obesity is an energy imbalance between calories consumed and calories burned. This is caused mainly by consumption of energy-dense foods which are high in fat and sugar, but contain too few vitamins,as well as a trend towards decreased physical activity because of the sedentary nature of many leisure activities.

A US study shows that children in the United States between the ages of 8 and 18 spend on average 7.5 hours per day in front of the television, computer, video games, cell phone, and other electronic devices. Watching television contributes significantly to childhood obesity. Children can be discouraged from physical activity, while being pushed to eat in front of their screens.

The Consequences of Obesity

The most serious consequences of being overweight and obese, often not manifesting until adulthood, include cardiovascular diseases (mainly heart disease and stroke), diabetes, muscular disorders (particularly osteoarthritis),and certain types of cancers (endometrial, breast, and colon).

Obese and overweight children are more susceptible to being sick and need more medical follow-up than children who aren’t overweight. These children are also more likely to have weight problems as adults and are at a higher risk of morbidity, disability and premature death in adulthood.

How to Fight Childhood Obesity

Overweight and obesity, as well as the non-communicable diseases that accompany them, are largely preventable. The goal of the fight against childhood obesity is to achieve an energy balance that can be maintained throughout an individual’s life.

Parents can encourage their children to walk or bike to school or to go to various social activities. They can also make them a healthy breakfast every day before school. Feeding one’s child healthy food is essential and has lifelong effects.

Let’s work together to reduce the number of overweight and obese children. It’s one of the most accessible goals for improving children’s health.