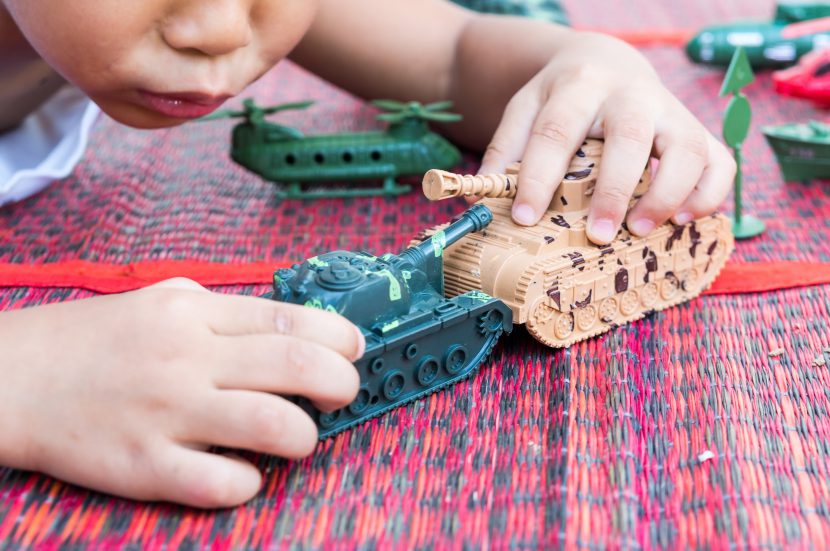 Worldwide, there are 250,000 to 300,000 children currently fighting in combat. Their recruitment already starts from the age of 10. The longer a conflict goes on, the more (increasingly younger) children replace adults in these wars. They are forced to kill, to loot and to fight at the front lines, they are driven through minefields or used as spies.

“They give you a gun and you have to shoot your best friend. They do it to see whether they can trust you. If you don’t kill them, then your friend is told to kill you. I had to do it, otherwise I would have been shot. That’s why I left. I just couldn’t take it any longer”

A boy from Colombia who was recruited by a paramilitary group at the age of 7, when he was living on the streets there.

Children are being recruited because they are more obedient and easier to manipulate than adults. Poverty, combined with a lack of education, and opportunities, as well as discrimination and vulnerability, make children the ideal victims for enlistment in armed groups. For orphans, children with no caregivers or those who have a difficult family background, war represents a solution to their problems. Joining an armed force seems to be the safest option for them rather than dealing with their problems. Forced recruitment also plays a role (see : https://www.humanium.org/en/child-soldier/)

Children have a right to peace and safety

The 2007 Paris Principles, signed by 105 countries including Canada and the UK, define child soldiers as follows:

“any person under 18 years of age who is or has been recruited or used by an armed force or armed group in any capacity (…), including but not limited to soldiers, cooks, porters, messengers, spies and for sexual purposes”.

Humanium has been campaigning against the use of children in armed conflict for ten years now and is a member of the Child Rights Connect working group against child soldiers. We are meeting with organisations such as Save the Children, Plan International, World Vision and Terre des Hommes in Geneva, the historic home of children’s rights, on a regular basis. We have a common goal and want to speak on behalf of the children: We are children, not soldiers. Our children, all children, have a right to peace and safety. The UN Convention on the Rights of the Child has set a fairly low common denominator, but it does exist: children under the age of 15 must not be directly involved in combat.

The reality is far different and our committee is most aware of that fact. The way things are, existing agreements are not being implemented. Even the most serious infringements to basic children’s rights entail no consequences for the most part; neither criminal proceedings nor repercussions on an international or diplomatic level. There are still over fifty countries where training children to use firearms is allowed. It is therefore all the more important to prevent injustice with a constitutional approach based on the law.

Against the use of children in armed conflict

Human rights (and therefore children’s rights) and peace are closely linked; both are based on the dignity and value attributed to every single member of the human family and thus on the dignity and value attributed to every child. During a presentation by our committee, Sarah M. Field (www.rights-streams.com) highlighted the fact that international law requires us to give children a voice during the peace process. The current legal framework is not uniform and the process is consequently guided by a number of national and international laws, political initiatives and conventions. There is nevertheless the need to resort to existing laws in order to underline the compelling necessity to establish peace where escalations are looming and to take the peace process into our own hands. What are we trying to achieve? To render children and their rights visible.

Children and their rights are commonly invisible during the peace process. Why is that and how can we change that? In collaboration with the organisations involved in the committee, we, at Humanium, would like to give children a voice and to support them in their development. Locally, and together with the children, our coaches are working on helping them to realise that they have a right to peace, safety and education and to express these rights. For example, we are writing letters to their political leaders together with them. Moreover, we will be contacting all countries that are illegally using children in armed conflict. Illegal because they all have signed the UN Convention on the Rights of the Child. The convention, signed by 195 countries, is the only one unanimously agreed by UN members. What does this tell us? That children’s rights are universally important, or, that the gruesome opposite is true and that they do not matter in the slightest, so that countries sign up to them only to then go and do with children whatever they want ? Because they are effectively defenceless? This is not so, children can stand up for themselves and we will help them do that.