Despite a recent war of independence, Croatia is committed to recognize and respect fundamental human rights, particularly through the adoption of legislation. However, thus far, compliance with regard to specific children’s rights in Croatia has fallen far short of its stated goals. Indeed, many violations are rampant in several spheres: such as child abuse, child labor, child marriage, etc.

17% of the Croatian population lives below the poverty line. These poor families live in unhealthy and uncomfortable conditions which are uncongenial for children’s proper development and welfare.

Children from these families are usually less healthy than their peers and have little chance to access higher education.

Education in Croatia is free and compulsory until the end of primary schooling. The majority of Croatian children can exercise their right to education, but this is not the case of Roma children.

Roma children are discriminated against in the classroom and often lack family support as well. Indeed, a child who is not supported financially and psychologically by his/her family will soon be persuaded by circumstances to discontinue attending school.

This discrimination is reflected in practice by the existence of separate classes that segregate the Roma minority from other Croatian children. They are considered inferior, of lower intellectual capacity, and are faced with greater learning difficulties.

All this affects the right of Roma children to gain access to the same level of education accorded other Croatian children: perpetuating and institutionalizing their inferior social status. Additionally, their level of fluency in the Croatian language is often low, which reduces their chances of successfully integrating into society.

All this explains the markedly higher illiteracy, dropout and delinquency rates among the Roma populations. 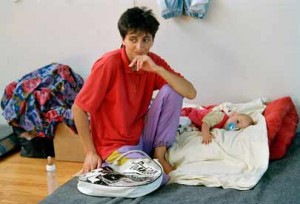 Despite legislative efforts, child abuse remains a major problem in Croatia. Many children are the victims of sexual abuse and exploitation, especially in relation to child pornography.

Invariably, such children suffer severe emotional trauma that proves intractable to treatment. In addition, frequent instances of rape of minors poses the risk of their contracting sexually transmitted diseases or suffering unwanted pregnancies.

Corporal punishment is another form of abuse that is widely prevalent in Croatia. Indeed, despite a concerted government campaign to combat this scourge, its incidence has shown no appreciable decrease. Children are at risk of suffering physical abuse both in school and within the family home.

Despite the lack of official statistics on child marriage in Croatia, social services personnel, activists and concerned citizens denounce the practice as common and condemn its causes.

The children affected by this scourge are mainly Roma. It is customary in this community to compel any girl who becomes pregnant, regardless of her age, to marry. This causes serious health consequences: often contributing to abnormally high rates of maternal and infant mortality. Moreover, besides being physically unprepared for marriage and maternity, these child brides are psychologically ill-equipped to cope with the challenging obligations and consequences of a state they do not understand.

Despite the adoption of laws against child exploitation, Croatia must still deal with the widespread problem of child labor in its hospitality, tourism and industrial sectors, among others. Commercial exploitation forces many children to engage in unregulated labour at all hours – including at night – in unsanitary and often dangerous conditions: exposing them to serious health risks.

Juvenile offenders in Croatia frequently have their rights violated, with mistreatment being most common – and cruel – during the early stages of their detention.

Representatives of the Committee on the Rights of the Child have reported the widespread prevalence of physical assaults that include punching, kicking and the use of batons, besides solitary confinement, denial of meals, etc. These and other punitive practices cause severe physical problems and often leave indelible psychological scars.

Clearly, Croatia must change its attitudes and rules regarding the detention of youth in prisons to comply with the Convention on the Rights of the Child, which stipulates that children have the right to develop free of all forms of violence.

With an average 7.2 tons of CO2 emissions per capita per year, Croatia has a poor record in the fight against pollution. All children have the right to live and develop in a healthy environment, and it is imperative that the country reduce its carbon footprint to minimize its adverse impact on the lives and future prospects of its children.