Whether one speaks of sexual abuse, sexual violence or sexual exploitation for commercial purposes, it is invariably a question of criminal practices and unbearable suffering for children. Sexual exploitation is a direct affront to and assault on the dignity and fundamental rights of children.

Defining the Sexual Exploitation of Children

A sexual exploiter is someone “who unjustly profits from a certain disequilibrium of power between himself and a person less than 18 years of age in the hope of sexually exploiting that person either for profit or for personal pleasure.”

Sexual abuse is inflicted by someone who stands in a position of power over the victim. It can be a family member, a member of the victim’s community, a teacher or any other authority figure. Vulnerable and defenseless children are often the targets and victims of adults who abuse their power in order to prey upon them.

The World Health Organization defines sexual violence as “any sexual act, attempt to obtain a sexual act, unwanted sexual comments or advances, or acts to traffic, or otherwise directed, against a person’s sexuality using coercion, by any person regardless of their relationship to the victim, in any setting, including but not limited to home and work.”

Individuals who are guilty of committing acts of sexual violence against children do so not simply to satisfy their desire to be intimate with their victims, but because they know that ch 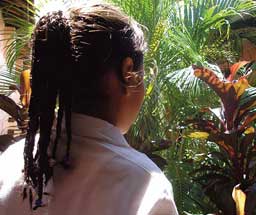 Sexual commerce is a problem in many countries around the globe. It is illegal and takes many different forms and it is difficult to measure.

The expression “sexual exploitation for commercial purposes” can, as it pertains to children, designate sexual relations in which the child is paid for his or her services. However, it is often the case that the victim is not paid; rather, the money goes to the exploiter.

In the case of child-trafficking, the victims are recruited, transported, housed and fed by their exploiter who forces them to work in whorehouses or other establishments that cater to such activity.

As for child pornography, certain exploiters do not hesitate to photograph, film, or videotape sex scenes involving minors which they then sell for commercial gain. (How can a pedophile site be identified?)

Sexual commerce is often tied to tourism.  Many foreign men and women do not hesitate to visit such countries as Thailand in order to engage in sexual relations with children.

Sexual Exploitation and the World at Large

Not a second goes by without a child being raped, tortured or abused somewhere in the world.  It is estimated, for example, that: 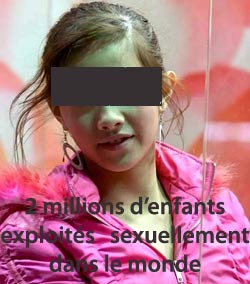 It suffices to say that it is difficult to obtain precise figures on issues like these.

Factors Contributing to the Sexual Exploitation of Children

Numerous factors contribute the sexual exploitation of minors.  These include:

– Poverty : poor children are more vulnerable than others because they believe that what the exploiters offer is a chance to make a decent living.

They quickly lose hope and find they are the perpetual victims of sexual relationships based solely on violence and force.

– Sex-trafficking networks:  the development of communication technology (cell phones, the Internet, etc.) permits the rapid spread of information throughout the world.  Consequently, international and cross-border networks of child-traffickers have developed, thereby facilitating the exploitation of children all over the globe. 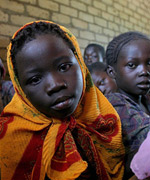 – Humanitarian crises : caused by armed conflicts or natural catastrophes, such crises aggravate the precarious situation in which children find themselves.

Helpless children, sometimes orphans, who struggle day in and day out to survive, are often easy prey for individuals who wish to sexually exploit them.

– Worldwide development of the sex industry :such development leads to an increase in the size, shape and scope of sexual exploitation.

Children and the Consequences of Sexual Exploitation

Children who are the victims of sexual exploitation suffer from physical and emotional trauma.

They are vulnerable to manipulation and end up performing acts that they have no wish to do.

Consequently, they lose all confidence in adults and their promises. They believe themselves to be abandoned and rejected by society, and don’t know anyone whom they can turn to for support.

Sexual exploitation has a negative impact on the physical state of children. Forced to have sexual relations, they risk contracting sexually transmitted diseases and the AIDS virus.  Young girls also risk becoming pregnant. Should this happen, they generally have no one to turn to for support. Furthermore, pregnancy at such an early age constitutes a veritable threat to the health of both mother and baby alike.

How to Combat the Sexual Exploitation of Minors?

The authorities must make a serious effort to comply with and enforce Article 34 of the International Convention of Children’s Rights which states:  “States must protect children from all forms of sexual exploitation and sexual violence.”

We can all do our part in combatting sexual exploitation by keeping the world informed about such practices and reporting those who exploit children to the appropriate authorities.