Each day, more than 30,000 children die of poverty-related causes. Today, poverty kills one child every 3 seconds. Children are the primary victims of poverty, and poverty is the principal cause of violations pertaining to Children’s Rights.

A general definition of poverty is “a state of existence in which one lacks many of life’s basic necessities.” The poor person is someone “who lacks what he needs”; and a poor child is “a very young boy or girl who lacks much of what is needed to survive.”

From an economic perspective, poverty can be defined in two ways:

It is important to note that the economic definition of poverty is invariably tied to the question of monetary wealth.

However, poverty cannot be defined simply in terms of its material dimension; one must also take into account a person’s “ability to use the resources that he or she possesses.” (1) 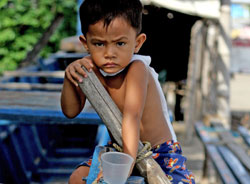 Beyond the monetary dimension, poverty has an effect on other fundamental rights. The dignity and self-worth of individuals are affected. Poverty impedes the exercise of individual liberties; it threatens the security of one’s existence (absence of revenue and of access to housing, medical care and justice) and undermines personal development across the board (intellectual, cultural, familial and social). (2)

With regard to children, the definition of poverty should not be limited to a consideration of insufficient financial resources. In effect, children who face poverty are also deprived of their fundamental rights and of future prospects.

Poverty hampers a child’s ability to survive; it impedes all aspects of his or her development (physical, mental, emotional, cultural, social, familial, spiritual, etc.).

The impact of poverty is so great that one can say without hesitation that poverty is the principal source of children’s rights violations. 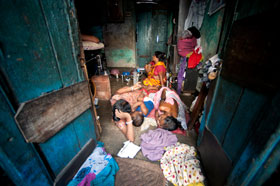 Children who are poor are often born into poverty.  “Poverty engenders poverty and creates a vicious circle.” (3) A child lives in poverty because his family and/or his country is facing poverty.

Historically, all nations have at one time or another confronted the question of misery and poverty. Today, extreme poverty affects more than a billion human beings throughout the world.

Poverty is on the decline, but the efforts to combat it remain insufficient. However, it is not a question of an unrealistic dream. Solutions exist. What is lacking is real political will on part of the world at large.

Consequences of Poverty on Children

The consequences of poverty on children are devastating. Today, poverty kills one child every three seconds.

Poverty deprives children of their fundamental right to life. In addition, it deprives them of educational opportunities and prevents them from gaining access to medical care, clean water, food, shelter, security and protection, information, etc.

Poverty thus constitutes a veritable threat to childhood and violates children’s rights (as defined by the International Convention of Children’s Rights) as a whole.

How to End Child Poverty

Respecting commitments made by the States to implement fundamental rights as enunciated by the International Convention of Children’s Rights would go a long way toward defeating poverty. 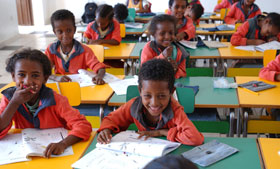 Respecting commitments made by the States to implement fundamental rights as enunciated by the International Convention of Children’s Rights would go a long way toward defeating poverty.

“No society can really defeat poverty without doing everything it can, in a vigorous and long-term manner, to ensure that all of its members have a right to and are able to receive basic medical care, nutritious food and a decent education.” (4)

In order to respect Children’s Rights, it is imperative that extreme poverty be defeated worldwide.

You too can get involved!