Since the coup of 2006, the Republic of Fiji, which comprises an archipelago of 322 islands, has experienced severe political instability. The constitution has been suspended and a state of emergency has been put in place. This could explain the difficulty faced by the government in ensuring the respect of children’s rights. Much effort has been made in this direction; however, despite this, the situation remains difficult. 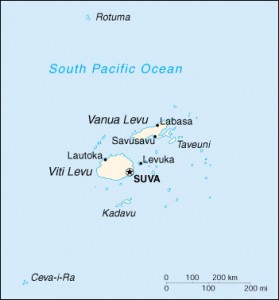 It is estimated that 80% of the population of the archipelago has access to care, but only 40% have access to quality care. The infant mortality rate for children aged <1 year is 15.2% and 23.2% for those aged <5 years.

Access to clean drinking water is very difficult in many cases, and this is the cause of many diarrhoea epidemics. Furthermore, only 60% of children are vaccinated against measles.

Despite the medical follow-up of school children, 1 child in 8 suffers from obesity or diabetes.

Finally, a braindrain of nursing staff to neighbouring countries has been observed; efforts should be made by the government to curb this trend to improve the national level of health care.

Schooling is free up to the end of the second cycle. However, the cost of uniforms, shoes, books and transportation is very high.

Transport is a real problem in the archipelago where road and sea transport infrastructure are inadequate. This explains the difference in enrolment rates among children from rural and urban areas.

Only 65% of children are enrolled at the primary level and 33% at the secondary level.

Although Fiji’s education system is one of the best in the Pacific region, it is ill-suited to the needs of the labour community and has been implicated in the unemployment of more than half of the students.

Various jobs are carried out by children, who are usually employed as domestic servants or as labourers on farms and in the fields.

Street children turn to low-skilled jobs such as shoe shiners or porters, but rapidly end up in prostitution or involved in pornography.

Such children are particularly vulnerable as government support measures, which are aimed at families, do not apply to them.

There is racial discrimination against indigenous Fijians and women are less highly regarded than men.

Even the best children with learning disabilities drop out of school after the first cycle and children born out of wedlock are discriminated against.

People with disabilities have no legislative protection and facilities available to them are almost non-existent.

It should be noted that corporal punishment is legally permitted at home.

At school, corporal punishment is banned but still regularly practised in some areas.

Early marriage is regularly practised as girls are considered a burden.

Freedom of expression and assembly

Freedom of speech, worship and the assembly of more than 10 persons are prohibited both for children and adults.