At The Hague Global Child Labour Conference in 2010, Lebanon made the commitment to eliminate the worst forms of child labour in its country by 2016. According to the ILO Convention on the Worst Forms of Child Labour, these comprise; slavery in all its forms, child prostitution and pornography, children involved in illicit activities – especially drug trafficking- , and “work which, by its nature or the circumstances in which it is carried out, is likely to harm the health, safety or morals of children”(ILO C182, art.3(d)).

In this last categ 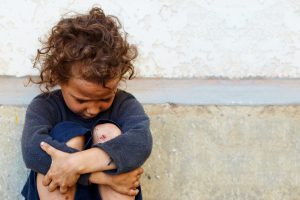 ory, the Lebanese government has decided in its Decree 8987 on the Worst Forms of Child Labour to include child street labour. The Decree stipulates that living or working on the street involves psychological hazards for children (Ministry of Labour, 2015). Street work for children also certainly falls within the category of activities limiting a normal access to education. Street work is thus completely prohibited by law for children under 18 years old in Lebanon. However, the real situation of street children in Lebanon is far from meeting these standards of legal protection. Moreover, Lebanese law is also inconsistent; while the Decree seeks to protect street children, the Lebanese Penal Code criminalizes begging.

Who are street children?

Children can find themselves living and working in the street for several reasons. Some come from poor or vulnerable households and suffer from social exclusion. This is notably the case for children from Syrian asylum-seeker and refugee families. Organized crime and exploitation of children is also a cause of the phenomenon (ILO et al., 2015).

In 2015, a report by UNICEF, the ILO, Save the Children and the Lebanese Ministry of Labor identified around 1500 street children in 18 different districts of Lebanon, but it is likely that the real number is much higher ( ILO et al., 2015). The majority of these children are begging or selling items on the streets. Street children are mostly boys, half of them being between the ages of 10 and 14 years old. Among these children, 73% have fled the war from 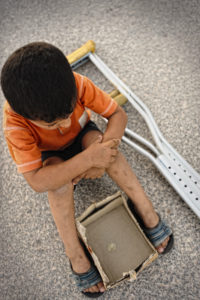 Syria with their families ( ILO et al., 2015). The report notes that “the majority of SBC [Street Based Children] are either illiterate and/or have never attended school. No less than 42 percent of SBC are completely illiterate” ( ILO et al., 2015), as street work prevents them from going to school. Nevertheless, a majority of street children express the wish to attend school.

Children living and working on the street work for long hours, on average 8.46 hours per day, 6 days per week. However, sometimes children have reported working as high as 16 hours per day, working every day of the week ( ILO et al., 2015). Night work is also frequent. Consequently, the health of these children suffers greatly. They may be required to work in the middle of traffic, putting them at risk of accidents and making them exposed to automotive exhaust gases. They are also vulnerable to verbal or physical abuse. In addition, the Lebanese law considers the weather conditions as safety hazards for children, as they may be required to work under the sun and in the heat of summer, or in cold or stormy weather.

Tackling the issue of children working on the street requires a holistic approach that targets, inter alia, economic factors and poverty, human trafficking and exploitation issues, as well as education. Moreover, the influx of Syrian children asylum-seekers also means that the government needs to double its efforts to help this particularly vulnerable population and its children. Back in 2013, the Lebanese 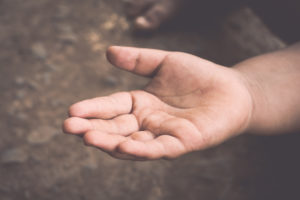 government, supported by the ILO, established a National Plan of Action with a child rights-based approach to tackle the problem. The plan foresees strategic interventions to reinforce access to education for children and to employment for adults, the adoption of new legislation, working with local authorities and community leaders, as well as programs of prevention, rehabilitation and reintegration (Ministry of Labor, 2013).

Despite its willingness, in 2016, the Lebanese government still has a lot of work to do in order to eliminate child street labor. The National Action Plan expires at the end of 2016. Hopefully, Lebanon will be able to renew its commitment to fight the worst forms of child labour beyond the end of this year.

ILO et al. (2015, February). Children Living and Working on the Streets in Lebanon: Profile and Magnitude. Retrieved October 3, 2016, from ILO

Ministry of Labour. (2013). National Action Plan to Eliminate the Worst Forms of Child Labour in Lebanon by 2016. Retrieved October 4, 2016, from ILO