Children living on the street

There are estimated to be around 120 million children living on the streets in the world (30 million in Africa, 30 million in Asia, and 60 million in South America). Often victims of all kinds of abuse, these children still have rights… 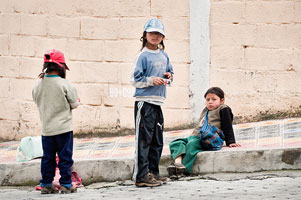 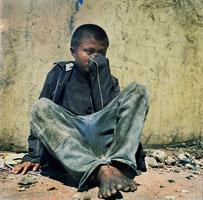 What is a street child?

Street children are minors who live and survive on the streets. They often grow up in public landfills, train stations, our under the bridges of the world’s major cities. Because of conflicts with their family, these children don’t want to or can’t return home.

Why does a child live on the streets?

The phenomenon of street children is multifaceted. The combination of familial, economic, social, and political factors play an important role in their situation. It is therefore very difficult to single out one or more causes.

However, children who have been questioned say that family, poverty, abuse, war, etc. are often why they left for the streets.

What are the problems encountered by street children? 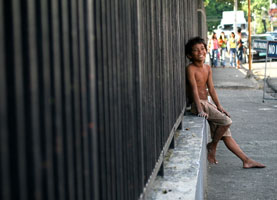 Street children are confronted by a large number of problems. In fact, growing up in an environment generally regarded as dangerous, they incur considerable risks.

As a consequence, some of their rights are very often compromised.

Street children often don’t have access to a healthy and sufficient diet. Sometimes they don’t even have food, because living on the streets,  they don’t produce any and don’t have money to buy.

Also, these children don’t benefit from a balanced diet: they eat what they can find. Sometimes, when they have the choice, they even favour unhealthy foods such as ice cream, cakes, etc. and so run the risk of malnutrition. Growth problems are also common with these children.

The health of children growing up on the streets is strongly compromised. In fact, they don’t have access to sanitary facilities: they are often dirty and infested with fleas.

Also, because of their lack of hygiene, street children are exposed to different diseases. Their health is often troubling. Without a family to take care of them, these youth must take care of themselves.

Additionally, street children, to escape their reality, often use cannabis, alcohol, or inhale natural gas. Unfortunately, these very hard living conditions, have a negative impact not only on their physical and psychosocial development, but also on their cultural and economic development.

Street Children are obviously not educated. Because of this, they don’t have the same opportunities as other children. In fact, because they don’t see a future for themselves, and because they have no professional training, they are hindered from finding a job and from finally leaving the streets.

“People speak badly of us,
they blame us for everything, and call us wad-bi or drogue-gnoudba.”

Seen as marginals, street youth are often victims of discrimination. Generally, adults have prejudices that stigmatise them as “street children”. Consequently, they are often associated with the dangers of the streets. It is often difficult for these children to reintegrate into society.

What can be done to help street children? 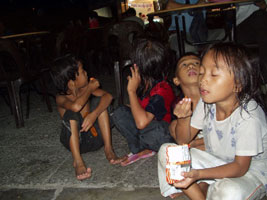 The problem of street children is dependant on their situation and not on their status. In fact, each child has a personal history with the street that cannot be generalised. Because of this, the care of street children must, to be effective, hinge on the different situations on the streets, in other words, on the many “child profiles”. It is important to analyse the relationship a child has with the street.

In order to better understand children living and growing up on the streets, it is essential both to make them participate, and to put them in contact with key institutions or individuals looking to understand the structural causes of their situation.