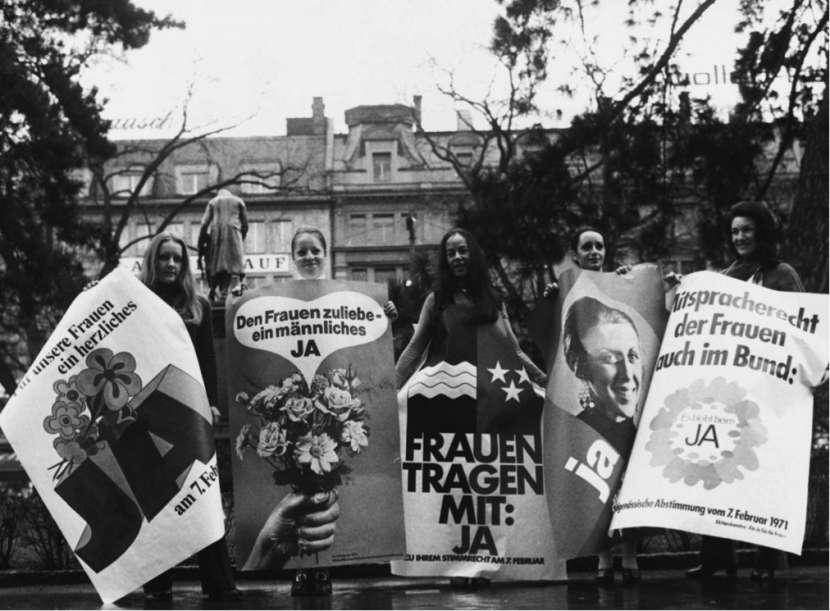 Today you might see Switzerland as a successful and safe country with regards to its commitment to equal rights for all. Most importantly,  you might think of Switzerland as a role model for the occidental world. All this is true. However, it has not always been this way – especially when it comes to equal rights between men and women. Even more of a surprise – some of the changes we take for granted today only date back to recent times.

Over 70 years ago, the foundation of Women’s Rights was established by the United Nations in Geneva, Switzerland.  Women’s Rights include the right to live without violence, slavery, and discrimination. Women should have access to education and have the right to vote all around the world. Moreover, women’s wages should be fair hence they should be remunerated the same way a men would be for the same work.

History of women’s rights in Europe

For a long time, women in Europe had little or no rights at all.  There were always secret groups among women who fought for their rights. These also had little or no influence. At the end of the 19th century, women’s rights started being recognised in a few countries. The first European country to introduce women’s rights was Finland in 1906. Women were allowed the right to vote and to be elected to parliament. Unlike Finland, Liechtenstein was the last European country to introduce women’s rights in 1984.

Evolution of women’s rights in Switzerland

In Switzerland, it took decades for women to be allocated the right to vote. In 1959, the cantons of Vaud and Neuchâtel as well as Geneva applied women’s rights. However, not all cantons followed. That same year, Switzerland failed to to introduce women’s rights at a national level through a referendum. It is not until 1971 that, finally, the second referendum was successful. This made Switzerland one of the lastest countries in Europe to introduce women’s rights. This decision was not recognised at the cantonal level, but only nationally. The last canton to implement the decision was Appenzell Innerrhoden in 1991.

In 1981, the law relating to gender equality and equal pay for equal work were put into statutory form in the Swiss constitution. Since two years ago, Switzerland holds the sixth place in Europe for best gender equality even though it still has a 19.3% gender pay gap; a higher percentage than the European average of 16%.

Arguments for and against women’s suffrage

As with all political major debates, arguments for and against are put forward.

One of the main arguments in favour of women’s suffrage is aimed at fundamental political principles and legal norms. The Swiss Federal Constitution states: “All Swiss are equal in the eyes of the law.” This also means that women should be treated equally to men. In addition, human rights state that all people have the right to vote, in other words, women are also entitled to this right. One can say that in a democratic system, as we have in Switzerland, women should be allowed to vote as well. If only men are entitled to vote, only “half” of the population would be able to express their opinion. On the other hand, women are also drivers of the economy  hence they are represented in public relations. Not all men were against women’s suffrage, some even helped and supported the campaigns.

The arguments against women’s suffrage were not only supported by the men. Surprisingly, some women were against their own voting rights. They argued that women should not be voting but devote their times to the care of their household and family. Can’t they express their political opinions (should they be entitled to have one) through their husbands? The idea of women’s suffrage was also frequently viewed as an overseas idea brought from abroad. Some argued that women then lose their femininity as soon as they become politically active. This was coupled with a fear of more women of foreign origin in Swiss politics.

How are women’s rights viewed today?

Women’s rights are not self-evident to this day. Some countries continue to ignore women in general. In some traditional cultures, they remain highly dependent on men for activities considered to be “day-to-day”.

It has not been more than three years since women were not only allowed to vote in Saudi Arabia but also to watch football matches in a stadium and to drive cars.

Women are fighting for their rights across the world. They are still disadvantaged in many sectors today as men’s wages are still often significantly higher than women for the same or similar work despite similar education and experience. Many occupational fields are also male-dominated.

To achieve these goals, women are helped in various organisations such as the Global Fund for Women and the United Nations. These organisations also operate in developing countries and seek support in gender equality.

So why was Switzerland so late?

Switzerland introduced women’s voting rights late because of the Swiss political system. Since it resulted in a constitutional amendment, the voting people must decide together with the cantons. For the introduction of the right to vote, the vote needs a majority of voting men.

For over 10 years,  we have devoted our efforts at Humanium to make children’s rights a reality as well as to support the girls who will become the women of tomorrow, women who must be treated as equals and have the same rights as any other individual.

In India our most recent effort  is to open a Residential Special Training Centre in Madhya Pradesh to end child labour through education, offer girl labourers tailored educational, physical, mental and emotional support, giving them a home to sleep, and ultimately to reintegrate these girls into public schools. This residential centre will welcome minimum 50 girls from July 2019 to get it up and running, more girls to be integrated as we go.. This project is an invaluable occasion to change the life of these girls, these future professionists, mothers and leaders of our tomorrow.

Independent. Veröffentlichungsdatum. Swiss Suffragettes were still fighting for the right to vote in 1971. (https://www.independent.co.uk/news/world/politics/swiss-suffragettes-were-still-fighting-for-the-right-to-vote-in-1971-10514445.html) 25.09.2015 Kurzform: independent.co.uk