“Education must once again become one of the cornerstone values of our world, it must once again flourish, it must be instilled as a force of happiness, fulfilment and hope.” Nelson Mandela, 1996

In Africa, and specifically in the northern region of Cameroon, under-enrollment and dropping out are significant problems that impede the achievement of universal primary education, particularly among girls. Over three million of them are undereducated! The lack of support for their schooling infringes enormously on their basic rights. Their dreams and potential are often undermined by discrimination, violence and unequal opportunities despite the fact that they are brimming with talent and creativity.

70% of Cameroonian girls are illiterate

Cameroon is among the countries that are committed to implementing universal primary and secondary education, which is one of the recommendations of the United Nations for the twenty-first century. But the reality is still far from these goals: 70% of Cameroonian girls are illiterate. This phenomenon is especially visible in the north region of Cameroon, where it affects more than one million girls between 10 and 19 years of age, which represents 31.9% of all girls in the region (UNESCO Institute of Statistics, 2016).

The under-enrollment of girls may be explained by several factors. The main reasons are poverty, the illiteracy of their family members or even cultural norms (Ministry of Economy, Planning and Regional Development, 2010) (Yaouba A., Kamdem Kamgno H., 2013).

The figures show that the girls living in the north region of Cameroon are less educated than the boys. According to the results of the campaign launched in August 2016, the majority of girls from this region are illiterate (Mbia S., 2016). This signifies a tremendous educational loss.

23.4% of girls are held back in their studies because of early pregnancy (12%) or early marriage (11.4%) (Community Barometer, 2016). In general, when they get pregnant, their relatives decide to stop paying for their studies because they believe that the girls have chosen to discontinue them. Thus, despite their desire to pursue their education, they are forced to abandon them. 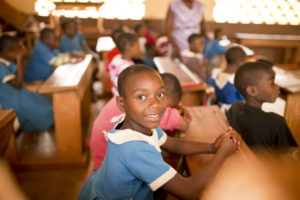 According to traditional norms in northern Cameroon, boys are more likely to have the chance to go to school. Some families, even if they are university-educated, remain steadfast to basic traditions, which stipulate that only boys have the right to higher education. Even those who have agreed to send their daughters to school believe that knowing how to read and write is sufficient. Thus, in this part of Cameroon, which is markedly Muslim, many people believe that an educated girl will, sooner or later, become a wife that is disobedient, arrogant and always wishing to demonstrate her intelligence to her husband.

Even in school, girls must defend their rights

The girls that are enrolled in school face certain obstacles. They remain targets of discrimination that is as much the result of teaching practices, as of the school administration’s attitude and the behavior of their peers. Worse yet, girls describe (referring to themselves in the third-person) instances of sexual harassment by teachers, particularly physical education instructors. Their evaluation method is often fundamentally repressive and they verbally attack girls. Even in relationships among classmates, from a young age boys behave aggressively and begin to show their authority over girls, which leads to strained relations between the sexes.

The conflict-ridden and violent relationships that girls have with their peers may cause them to become depressed and give them a more negative self-image. All of this discourages many girls from continuing their studies. The government’s measures to improve the quality of education have had less-than-satisfying results. The evaluation methods implemented by teachers prevent the empowerment of girls. In reality, the teaching culture does not promote girls’ integration into an educational establishment. The principle of co-education and gender ratios isn’t always respected.

Inadequate family support for the success of girls in school

Educational support at home starts with family members clearing a study space, asking questions and monitoring report cards, helping with homework or resolving any problems that are likely to lead to difficulties in their children’s studies. Girls must first tend to household duties and make sure there isn’t any shopping to do. Then, they may study, often late at night, when everyone is already sleeping. Hence, they have erratic sleeping schedules and suffer from drowsiness in class. Fathers are strict and controlling and employ disproportionate punishments against their daughters, they are often rebuked for minor mistakes and their families don’t believe in their abilities.

Overall, mothers are more concerned about their children’s school problems than fathers, and they focus more on boys than girls. There is thus a marked tendency to favor males at the expense of females, who are oppressed by prejudice. Given that it is a patriarchal society, even mothers expect more from boys than girls. As a result, girls’ education is not valued in the northern part of Cameroon.

The majority of girls are not enrolled in school and their education is not seen as particularly important. In Africa, girls must, above all, tend to domestic tasks and, in numerous regions where cultural norms haven’t changed much, they always remain confined to their private sphere.

Many families view their daughters as a source of income, marrying them off at a young age and receiving significant amounts of money for their dowry. Thus, once they are married, girls are considered commodities that belong to their husband. However, several studies show that an educated girl can more effectively contribute to her own and her family’s welfare.

UNESCO Institute of Statistics (07/2016) Leaving no one behind: how far on the way to universal primary and secondary education? Global Education Monitoring Report.
Advisory document 27/Informational form 37 [PDF] available at : http://unesdoc.unesco.org/images/0024/002452/245238F.pdf

Yaouba A., Kamdem Kamgno H., (18/11/2013) Gender inequity in the northern regions of Cameroon: factor research. Retrieved from The Postcolonialist : http://postcolonialist.com/civil-discourse/inegalites-sexuelles-de-scolarisation-dans-les-regions-septentrionales-du-cameroun-recherche-de-facteurs/

Mbia S., (7/10/2016) The Cameroonese woman’s woes: between the desire for autonomy and cultural reality. Retrieved from Afrique Actualité: http://www.afriqueactualite.com/…/5557-les-malheurs-de-la-femme-camerounaise-entre-des#.WMfxLTvhDIU