Ordinary educational violence, or OEV, includes all abusive behaviour of adults when in a dominant position against a child. It encompasses blows, spanking, slapping, punishments, and physical and psychological humiliations. It also includes broken promises, blackmail, manipulation, absences… (OVEO, 2008). OEV has a detrimental effect on the development of the child. And, to a large extent, it is authorized by French law.

One step forward, three steps back…

On December 22, 2016 the Parliament voted, under the Equality and Citizenship Law, to ban « ordinary educational » violence. Article 222 of the new law excluded « any cruel, degrading or humiliating treatment, including any use of physical violence » including for the first time so-called « educational violence ».

With this ban, France finally joined the 51 countries worldwide, including 32 in Europe, to have adopted such a law. It remedied, partially at least (no sanctions are foreseen at the moment), the Council of Europe’s March 2015 condemnation of France for this matter. This condemnation stipulates that France does not « foresee a sufficiently clear, restrictive 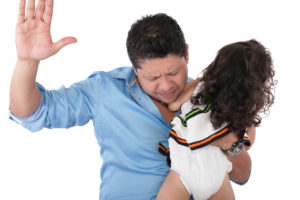 and precise ban on corporal punishment”, thereby breaching article 17 of the European Social Charter which states that signatories must “protect children and young persons against negligence, violence or exploitation” (Durand, 2016).

Even symbolically, this was a great step forward for the rights of children. But it did not last long; one month later, the Constitutional Council reverted to the amendment considering it as a « rider, that is to say irrelevant to the main purpose of the law (Battaglia, Dupont, Jacquin, Rey-Lefebvre, 2017)».

In France, only serious ill-treatment is punishable by law. For many parents, spanking is not considered corporal punishment: 50% of parents start hitting their child before age 2, 85% before age 5 (Peyrach, 2016). Yet, not only OEV is counterproductive but it also damages, sometimes profoundly, the child’s psycho-corporal development.

Educational violence is called ‘ordinary’ because it is « considered as commonplace, often daily, normal, tolerated, sometimes encouraged by society » (Gueguen, 2014).
Dr. Catherine Gueguen, a pediatrician at the Institut Franco-Britannique in Levallois-Perret, specializes in non-violent communication and support for parenthood. She is the author of “For a happy childhood, Rethinking Education in Light of the Latest Brain Discoveries », which explains how the OEV prevents the brain from evolving in an optimal way. We learn that children regularly receiving spanking are more violent than those never receiving any. 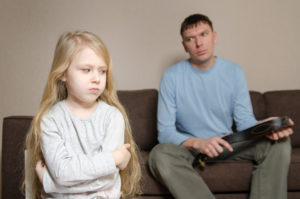 shown the link between OEV and hyperactivity syndrome, aggressiveness, anti-social behaviors, delinquency… These studies have focused on families considered « normal », excluding those presenting with addictive, depressive or other high risk behavior. They clearly demonstrate that the more violently children have been assaulted, the more violent they will be (Taylor, Manganello, Lee, Rice, 2010). Harsh corporal punishment, with belts, straps or other objects, has a detrimental effect on children: this is scientifically measurable. A 2009 study at Harvard revealed that the brain of a person hit by a belt in childhood presents a reduction in the volume of gray area in the prefrontal region, involved in empathy, the ability to reflect on his/her actions, attention and memory (Tomoda et al., 2009).

OEV causes a host of psychological disorders. Some are triggered much later in adulthood: depression, anxiety and dissociative disorders, dependence on alcohol, drugs, lack of self-confidence, manias, etc. An education based on fear can not achieve the expected results. Children first see their parents as guides and base all their confidence on them. But when parents express their discontent or disappointment with anger and violence, the message is blurred: the child feels insecure, he anguishes and doubts. There are then distortions of reality and feelings of confusion. The people who love, encourage and protect them are also those who hit, humiliate and demean them. Of course, spanking is not the only cause of problems. All threats, insults 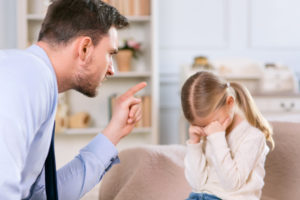 and blackmail are detrimental to the development of a child and will only teach them cowardice and hypocrisy since children who are beaten or humiliated only obey orders because they are afraid and they often start secretly messing around again.

Our children learn by example. It is widely accepted throughout the world that hitting a child is part of their education. 14% of French say they have been victims of various forms of child abuse during their childhood (Enfant Bleu, 2015), while 70% claim they are against an anti-spanking law (Kovacs, 2015). Yet, in France, between 600 and 700 children die each year of abuse within their family, i.e. 2 children per day (L’Enfant bleu Toulouse, n.d.). Even if « we no longer speak of spanking at this point », not legislating on OEV enables domestic violence, a “private” matter that brings massive consequences. Contrary to popular belief, raising children without violence does not make them unmanageable. On the contrary, respected children are on average more respectful, more empathic, more confident.

Because the future belongs to our children and it is up to us to give them every chance of becoming balanced and happy adults, we must be aware of the harmfulness of OEV and its uselessness. A petition seeking to reinstate Article 222 of the Equality and Citizenship Law, initiated by Dr. Catherine Gueguen, the Observatoire de la violence éducative ordinaire and Stop VEO, Enfance sans violence is currently online on Change.org.