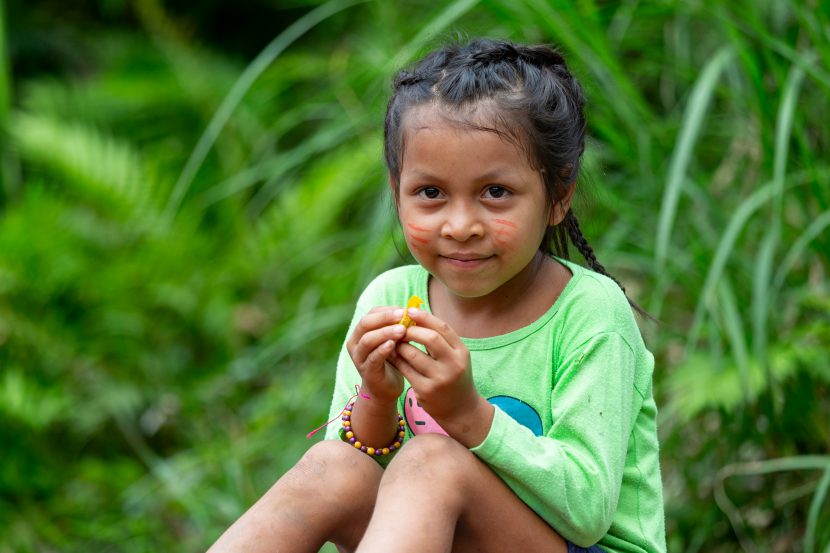 Nine girls from the Ecuadorian Amazon and their respective communities of origin won their appeal before the Sucumbíos Provincial Court of Justice, in which they had asked the State of Ecuador to assume its environmental responsibilities to ban the practice of gas flaring and to bring reparations to thousands of affected local and indigenous communities. This is certainly a landmark ruling for environmental rights, requiring oil companies’ accountability for the environmental and health impacts of their activities.

Healthy environment – a right and a privilege

The right to live in a healthy and clean environment, the right to health, the right to water and the right to food are essential human rights, which are not yet fully guaranteed in the world, exposing individuals and entire communities of our planet to serious social, environmental and climatic injustices.

In the Ecuadorian Amazon, for example, people have been fighting for a long time against “gas flaring“, a practice linked to the oil industry that for decades has been disrupting the delicate and complex local ecosystem and is rapidly undermining the well-being and health of the people who inhabit those extraordinary lands (World Rainforest Movement, 2019).

Burning the natural gas that escapes from oil wells as a byproduct of petroleum at an average temperature of 400° Celsius (750° Fahrenheit) 24-hours a day, year-round, and in residential areas with no protection for exposed families, has been an established practice in the Ecuadorian Amazon since 1967, when Chevron-Texaco began drilling the first commercially valuable oil (Earth.org, 2021).

The high levels of air pollution, soil and water contamination are directly related to the high incidence rate of cancer, malformations, miscarriages and deaths among the population living near more than 447 oil towers operating in that vast area (Amazon Frontlines, 2021).  Pablo Fajardo, one of the lawyers who represents the girls and the Union of People Affected by Texaco (UDAPT), has said that UDAPT and Clínica Ambiental spent two years compiling records of cancer cases in Sucumbíos and Orellana. They documented 251 such cases, with women accounting for 71% of them (Earth.org, 2021).

A historical victory for nature and the Ecuadorian community

“I’m very happy because, finally, justice has been served. We’re going to restore nature, for all the sick children, for the people, for the parents who have fought to stay healthy, for the families that have also kept fighting if only to grow a few crops, for the families who live under the flares and have had to abandon their land.”

On January 26, 2021, nine young Ecuadorian girls, Leonela Moncayo, Rosa Valladolid, Skarlett Naranjo, Jamileth Jurado, Denisse Nuñez, Dannya Bravo, Mishell Mora, Jeyner Tejena, and Kerly Herrera, and their respective communities of origin, won the appeal filed on February 20, 2020 before the Provincial Court of Justice of Sucumbíos, in which they asked the State of Ecuador – formally the Ministry of Energy and Non-Renewable Natural Resources and the Ministry of Environment and Water Resources – to assume its environmental responsibilities, to ban the criminal practice of “gas flaring” and to close all existing oil towers (Mongabay, 2021).

The legal case on gas flaring in Ecuador was brought by the nine girls through a collaboration of several civil-society organizations, including UDAPT and the Clinica Ambiental, and others forming the Ecuadorian Alliance for Human Rights, such as Acción Ecologica and Amazon Frontlines, among others (Amazon Frontlines, 2021).

According to the relevant judgment, the Ecuadorian State has ignored the right of the plaintiffs to live in a healthy and ecologically balanced environment and has also violated their right to health due to the inability (or unwillingness) of the state authorities to promote the use of “clean” technologies and/or renewable and non-polluting energy sources.

Furthermore, the ruling has also recognized that Ecuador has systematically violated its international obligations on climate change, and its national commitments to reduce CO2 emissions into the atmosphere. These in fact would decrease by 24% if the 447 oil towers were to stop operating (UNDP, 2021). Alternatively, natural gas could be used for domestic use or for power generation to fuel local oil facilities. This would put it back into the process and prevent its combustion.

These solutions will be adoptable when the oil industry resorts to new standards and innovative, sustainable procedures (UNFCCC, 2021). For the local communities and for the entire country, this is an historic victory, which has paved the way for a series of proceedings for reparation and compensation for the damages caused to the victims concerned.

A right to health should override economics

The country’s oil industry and, in particular, the prestigious state oil company Petroamazonas, must now account for its actions and its harmful consequences in the provinces of Sucumbíos and Orellana. After intimating the Ecuadorian State to respect and not delegitimize the aforementioned ruling and to immediately apply its provisions for the common good, avoiding bending to the short-sighted interests of business and the economy, Pablo Fajardo, has stressed that “economic interests cannot prevail over life and nature” (The Ecologist, 2020).

“These girls who today were petitioners could tomorrow be victims of cancer.”

In the same hours of the ruling, another piece of news expected by environmental movements in the Ecuadorian Amazon finally arrived. Three European banks, BNP Paribas, Credit Suisse and ING, announced on Monday that in response to environmental criticism they will stop financing oil trade from the Amazon region of Ecuador (Aljazeera, 2021). The two major NGOs advocating for this policy change are Amazon Watch and Stand.earth.

The last few months have seen a major step forward the recognition of environmental rights and have reaffirmed how crucial the work of NGOs and child environmental activists all around the world is in shaping policies. Their commitment will have important life-enhancing effects on entire communities of people, who can finally hope for a better future where their rights may be finally recognized.

The Joint-Statement draws attention to the particular vulnerability of children’s health and well-being to environmental harm. The signatories called on UN Member States to take concrete actions to formally and universally recognize the right to a healthy environment as soon as possible and to ensure that children can live dignified, healthy and fulfilling lives.

If you want to contribute towards the fulfillment of children’s environmental rights around the world, consider supporting Humanium’s ongoing efforts by making a donation, becoming a Humanium member or joining the Humanium community and becoming a volunteer! Together let’s make the world a better, safer and healthier place for children!