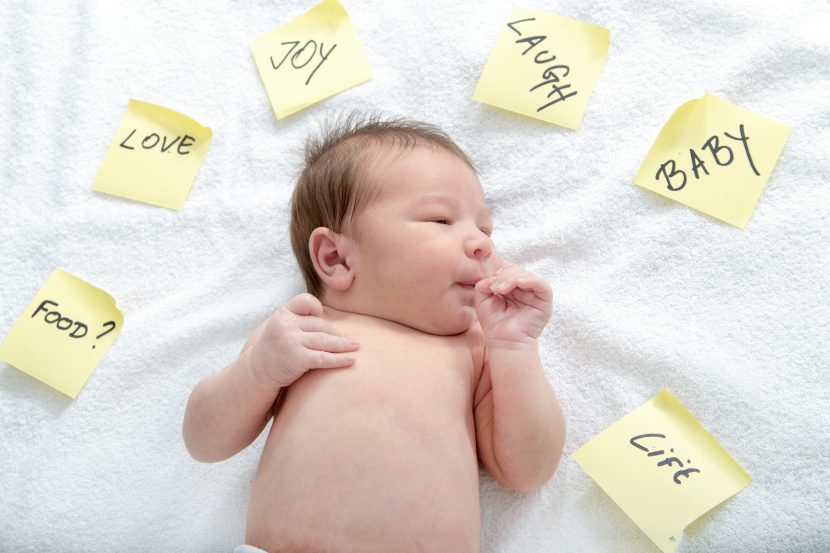 When a newborn enters our world s(he) works very hard…

“Holy cow, what’s that ? It was so gentle, kind, whole in mom’s tummy and now… yes… what’s that ? No food delivery, tummy ache and… yes… totally dependent… and even worse… helpless…”

The first narcissism starts in mom’s uterus, a form of interaction between the fetus and her/his milieu, mostly biological her/his psyche is not yet constructed. The right to life is touched ? Yesssss… and.. a form of symbiosis happens between mom and fetus.

Her/His psyche starts slowly to develop.. we know that because while in the uterus the fetus starts recognizing the voice of her / his mother, as science has proven. On the other hand, Dad’s voice, s(he) can only recognize 15 weeks after s(he) has entered our world as a separate and unique human being.

What’s next ? Well, loads of work awaits the baby: S(he) lives in the chaotic new environment by discovering things, with the most present goal of finding pleasure.

The newborn seems to prefer to be the creator of her/his environment, that way the feeling of helplessness can be overcome.

A bit like in a much later stage where we humans typically prefer the feeling of guiltiness rather than helplessness. And, feeling protected is so important in these first months of existence, holding the newborn is the basis of trust into this new environment in order to calm down and look brightly into life that is going to unfold.

And daddy ? Well, in a sufficiently good environment a triangle is being formed between baby, mom and dad. Mom and dad both mimic the baby by interpreting her / his facial expressions which acts as a sufficiently good mirror.. mom seems to be better skilled because of the first symbiotic months–through breast feeding and holding she is biologically better skilled to connect with the baby. Dad, however, can live up to his role whilst creating a framework, a framework into which mom and newborn feel protected and supported. Dad and mom can and should transform the chaotic months in a baby’s life into something tangible, slowly taking the fear of all these new things and replacing it with trust by spreading love. There is hardly anything more important than providing trust to a newborn, then food in the form of breast milk and…

But, what about the psyche? Well, in the first months mom’s psyche is sort of rented to the newborn, her / his psyche is a form of copy and paste from mom’s psyche, then baby starts to look at dad, sisters and brothers, uncles and aunts, friends.. until her / his own psyche is developed and then the most important years of life pass by.

In fact scientists agree unanimously that childhood in itself is primordial for the rest of a being’s life, all later beliefs are written down here.. and important work that can be done as an adult is to become conscious of one’s convictions.  Yes, by becoming conscious we can be transformed, yes.

Slowly parents will discover newborn’s pleasure of solving problems and slowly, ever so slowly a relationship in two forms is being born: First, the sharing of bodily feelings and second the tuning of emotions: the work of a lifetime has started.