Universally recognized as an abomination, child labor is still a reality in our societies. Many children around the world are engaged in an economic activity that greatly compromises their development and their complete personal fulfillment, and may even jeopardise their lives. The Convention on the Rights of the Child (CRC) in its article 1 defines the child as “every human being under the age of eighteen years unless, under the law applicable to the child, majority is attained earlier.”

88 million boys and 64 million girls are thus economically occupied. By employing 71% of working children, agriculture is the sector that employs the most underaged workers. The other sectors, i.e. industry and services, employ 12% and 17% respectively of working children. An even more damning fact is the finding that 48% of children who are employed are aged 5 to 11 years. They are therefore not of legal age to start an economically profitable activity.

The reasons behind child labour

There are multiple reasons leading to child labour.

The first and biggest reason is poverty, which largely explains such a high rate of child laborers in Africa. As the majority of the African population is poor, children are often forced to work to provide for their family.

Many exploited children are unable to prove their exploitative status in the absence of a birth certificate.

Problematic access to schooling, the failing education system, and parents often unaware of the importance of school are also reasons that encourage child labor.

In addition to these reasons, one can add employers that are interested in “cheap” labor, humanitarian crises, and the conflicts that give birth to child soldiers. (Plan International, 2016)

Children facing conditions which lead to child labour will suffer many harmful effects when performing their economic activity.

The harmful effects of child labour 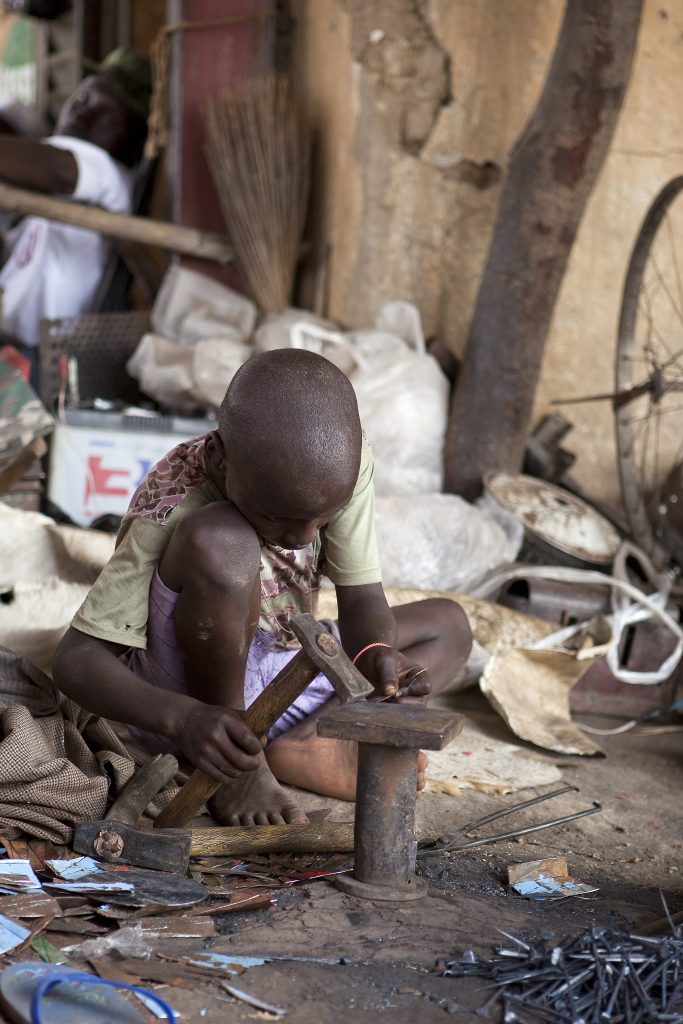 Children from poor families and rural areas are the most vulnerable to different forms of exploitation. These children, deprived of their childhood, experience miserable working conditions.

Work in agricultural fields and plantations requires children to carry heavy loads, to handle sharp tools, and to be exposed to dangerous chemicals. This puts children at risk of serious injury and poisoning.

A million children are sexually exploited (ILO). Sexual exploitation causes children to be sequestered, beaten, or malnourished. The exposure of these children to sexually transmitted diseases is great.

Children working in mines and quarries suffer from lung diseases, from silicosis, and from tuberculosis because they are exposed to explosive gases and harmful dust at their work site.

Child soldiers risk their lives daily and expose themselves to severe disabilities. They therefore face many physical traumas and especially serious psychological trauma.

Many are the children subjected to an activity to the detriment of their physical and moral development. They suffer much harm and are often left behind without real prospect of hope for a better future. These children are thus confined in a perpetual cycle of poverty.

At Humanium, it is considered of the greatest importance to educate parents who view education as a long-term investment. To this end, putting together communities is the approach we are now adopting in India and Rwanda.

Convention on the Rights of the Child (CRC)