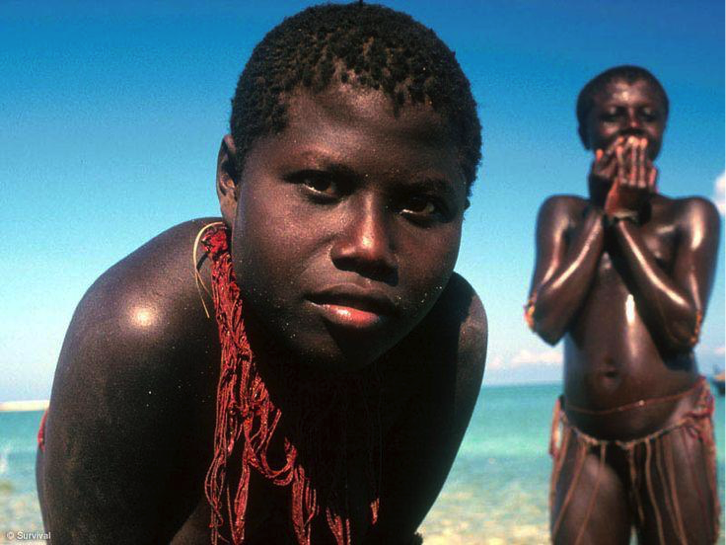 The Andaman islands are an archipelago in the Bay of Bengal, to the south of Myanmar. According to Chaubey and Endicott (2013) the islands were first settled by migrations from Africa some 26 000 years ago. The settlers, also known as ‘negritos’ or ‘Andamanese’, were living on the entire archipelago when the British arrived in 1789. Following their arrival, diseases such as pneumonia, measles, influenza spread and caused a fall in the number of inhabitants leaving the tribes on the brink of extinction. It has been speculated that parts of the British-Indian administration were ordered to annihilate the Andamese. By the 1920s, with extinction of the Jangil, only four of the five original groups survived.

Fast forward to the 21st century. Only a few hundred Andamanese survived and the tribes less in contact with the outside have fared better. The Great Andamanese are barely hanging on. Outsiders argued that this “so-called civilisation” would bring them benefits but today few claim it has. The Jarawa are shown to tourists on safari. The Onge have been relocated to the reserve where drug has lead to an increase of deaths in the population. Only the Sentinelese cling on to their fragile freedom on the North Sentinel Island. Somehow, their attitude toward intruders has spared them for the time being but they remain at the Indian government’s “do not disturb” approach’s mercy. However, it is only so long we humans are able to resist the temptation led by our curiosity, and by our drive for conquest.

I planned on answering the following question: How are Andamanese children’s rights respected, protected and fulfilled? – Keeping in mind what those rights were, soon, I encountered unexpected difficulties in this query. I asked myself the question: we can assume that realising each and every one of these rights are in the best interest of every single child.

According to the Jarawa Campaign (http://www.organicthejarawa.com), the Indian government runs schools for Jarawa children within which he encourages willing students to participate by distributing bananas. A parliamentary committee ascertained that the most dedicated students are more likely to get involved in what we would call ‘mainstream society’. But should not all children have the right to go to school? How about the right to belong to a country?

Realising the right of freedom

At this point, one ought to stop and ask questions before jumping to conclusions. One could easily assume that our world and our truths are universal. One could easily assume that we, as ambassadors of children’s rights, are above the so-called “cultural boundaries” with which some justify the sufferings of women (female genital mutilation, neck coils, etc.) or children (forced child marriages, child slavery, etc.). One-sidedness is a real threat that humans are prone to get caught in. How many times during the history of mankind have we caused only more suffering by imposing our lifestyle on subjucated populations and justifying it with narrow-minded arguments? And if we do not consider recently contacted tribes “conquests”, we better think again.

One of our greatest warrior against universally accepted truths was Charles Darwin, who strongfully maintained his idea of evolution: species and populations compete for limited resources leading to the extinction of the weakest. Whether we support his belief or whether we don’t, his drive to follow a different path is admirable to all. Indeed, he famously stated: “I am not apt to follow blindly the lead of other men.” Whatever is happening in the Andaman Islands (and elsewhere), we cannot assume is right purely because it is perceived as such by a majority.

There is a thin rope we need to walk between children’s rights and mysticizing culture. It would be easy not to philosophize and follow a prescribed recipe for human rights. Equally, each culture’s view of children’s rights cannot set us apart but bring us together as it is universal.The first line of the Preamble of the 1948 Universal Declaration of Human Rights states: “Whereas recognition of the inherent dignity and of the equal and inalienable rights of all members of the human family is the foundation of freedom, justice and peace in the world”[1]. An underpinning principle behind every human right is freedom. According to the Merriam-Webster dictionary, freedom is defined as “the absence of necessity, coercion, or constraint in choice or action”.

Often we, “children of the civilized world”, expect our offspring to make choices (such as electing a career or study path or confirm to a gender role) that could influence the rest of their lives for the better or the worse. Thus, we acknowledge that children possess the freedom of choice and that they are rightfully in charge of their future. Should not Jarawa children (and adults) be given unbiased picture-handbooks on the lurking dangers of integration alongside the pros and cons of isolation instead of being lured to school with bananas? This could pave the way to a world free of necessity, coercion or constraint.

[1] This principle is repated in the Convention of the right of the child, 1st parag. Of the preamble, https://www.humanium.org/en/convention/text/