Mongolia has the lowest population density of any country, with most of its vast area being undeveloped and even insufficiently mapped. It is a country where children are not the most unfortunate, compared to those in other nations; nevertheless, the situation of Mongolian children living on the streets is cause for mounting concern, as is the plight of those leading a nomadic life.

Poverty is rampant in Mongolia, with 36% of the population living below the poverty line. This problematic situation is compounded by worrisome – and widening – disparities between rural and urban areas.

Mongolian children directly suffer the devastating consequences of the lack of resources: notably with regard to heath, nutrition, hygiene and education. The rapidly growing shantytown populations are the most adversely affected by these shortcomings.

The number of health problems affecting Mongolia’s adolescents is on the rise. The principal problems include stress, depression, anomie and accelerating addiction to tobacco and drugs. Urban children, particularly girls, are especially hard hit.

The means of prevention, information and aid for adolescents in difficulty are insufficient in both urban and isolated rural areas. Consequently, the country has one of the world’s highest rates of both child and adult suicides. 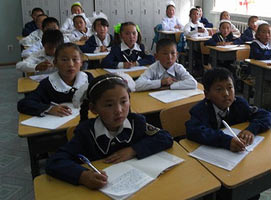 Mongolia has striven to improve the spread and quality of the education its children receive.  Thanks to these efforts, schooling is free and mandatory. However, many problems persist.

It has been observed that boys are underrepresented in schools. They abandon their education early in life: reflecting a traditional mindset that downplays the need for males to continue their education beyond adolescence. This is especially endemic in nomad populations – 30% of the total – where boys assume the role of herdsmen early in life.

Another disturbing problem is the persistence of corporal punishment within schools. It is still largely accepted and administered by teachers – with the tacit approval of parents. Its harmful physical and psychological consequences weigh heavily upon its victims throughout their lives.

Despite implemented and proposed improvements in the field of education, the Mongolian government’s efforts have not adequately benefited geographically isolated populations. A significant proportion of children – those living outside the cities – have not been able to profit from the same curricula as their urban counterparts.

Approximately 18% of Mongolia’s children are economically active. Many of them drop out of school early to find work and help support their families: this practice being especially prevalent in nomadic communities where it is the cultural norm. Their work environments – particularly in urban areas – are often hazardous to their health and frequently place their lives in jeopardy.

The mining and agricultural sectors employ a sizeable number of children. Such menial labor is exhausting for young, growing children – as well as risky. The repercussions for their physical and mental health are numerous and malignant. For example, Mongolia’s widespread gold industry poses serious health problems for child participants exposed to the extremely noxious chemicals involved in the production process. 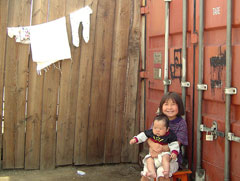 The number of children living on the streets in Mongolia’s cities is constantly rising. Fleeing the poverty and abuse of their native regions, these children dream of employment and a better life in the cities. Sadly, the reality is far from being conducive to fulfilling even their most modest hopes. The struggle for survival is difficult, strewn with pitfalls and commonly doomed to grim failure. In the country’s capital, Ulan-Bator alone – home to an astounding 45% of the country’s population of 2.75 million – the number of children condemned to this fate has been estimated to be 400,000, or 14.5% of the entire population.

The conditions of life under these circumstances are nothing short of tragic. Homeless youth struggle day and night to find food and shelter. Organized criminals profit from their precarious situation, with countless children ending up as victims of the drug- and sex-trade and trafficking.  Children trapped in criminal nets are remorselessly exploited, abused both economically and sexually, and face daunting future prospects that are uniformly bleak, if not nonexistent.

Despite the country’s recent efforts to improve the lot of physically and mentally challenged children, much remains to be done. Such children are marginalized by society and have their basic rights routinely violated. Services and organizations that specialize in helping disabled children are woefully inadequate.

Besides not having their rights fully guaranteed, such children’s access to public services is severely limited. For example, it remains difficult for them to receive an education or to obtain proper medical care: making disability all the more burdensome to affected individuals and society as a whole.