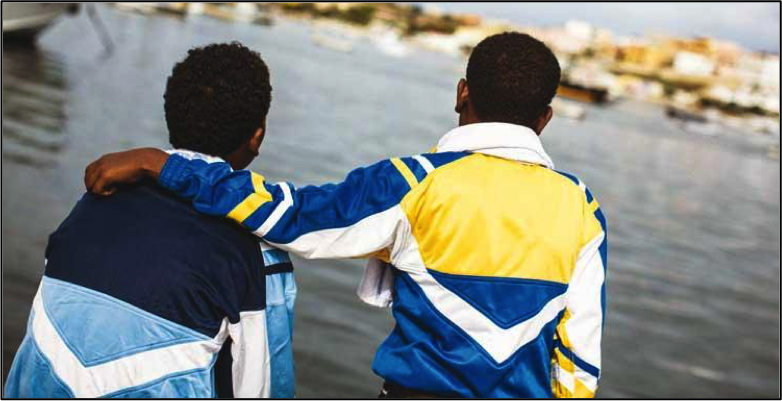 For several years now, the situation of unaccompanied minors has been revealing a new aspect to migration. The situation of minors is all the more worrying because their legal status is not clearly covered by domestic legislation. This is because the concept of unaccompanied minors is relatively recent. This results in unaccompanied minors being abandoned to their own fate in many countries, living precarious lives, often without having their rights respected. On the other hand, because of their age, they are more vulnerable to the abuse these children might encounter on their migration journey, such as child exploitation, sexual trafficking, and human trafficking networks.

In Morocco, which acts both as a transit country and a destination country, the identification of unaccompanied minors is complicated for several reasons. It is very difficult to quantify the number of these minors because they often pass themselves off as adults, as they see their minority as a vulnerability and are not aware of their right to special protection. Others simply avoid and flee from the authorities, out of a fear of being returned to their country of origin. A recent study carried out by Caritas Morocco[1] states that therefore the number of these minors in the country can only be approximated. Unaccompanied minors account for 11% of migrants supported by the Association. This figure tripled between 2013 and 2015[2].

In addition to these unaccompanied minors with irregular migrant status in Morocco, there is also a large flow of young Moroccans who have been separated from their parents or abandoned who migrate to Europe via Spain.

These migration phenomena pose questions as to what is required in terms of the mobilisation of Moroccan civil society and its strengthening of child protection.

The situation of unaccompanied minors in Morocco: an identity problem and a legislative vacuum

The Kingdom of Morocco, facing several patterns of migration, decided to implement a migration policy in 2013. This was achieved by introducing the National Strategy on Immigration and Asylum, in order to establish a regulatory and institutional framework to satisfy migration needs, to manage the flows, and to comply with international conventions. Despite many efforts, there are still challenges ahead, especially as regards unaccompanied minors in Morocco.

Often, unaccompanied minors arriving in Morocco do not have identity documents or movement documents to facilitate their access to many basic services, whether that be education, health, justice or child protection. Law No. 02-03 “relating to the entry and stay of foreigners into the Kingdom of Morocco and to irregular emigration and immigration” only mentions foreign adults as being obliged to possess a residence card, which means that minors should be exempt by virtue of children’s rights. However, in practice, this document represents a guarantee of protection, particularly because of a lack of information and staff awareness. Thus, there is a significant number of unaccompanied minors who cannot attend school, although in theory they have the right to do so. The same applies for access to professional training, since education and training are vital for inclusion and social reintegration.
In addition, dispossessed of any identity or residence documentation, these minors are particularly vulnerable to forced displacement. Some cannot prove they are minors in the eyes of the law.[3]

In order to address this issue, Moroccan civil society (associations and NGOs) recommends proposing legislation to issue a special document identifying them as minors, in order for them to access education, health care, and child protection institutions. Similarly, a control mechanism is recommended, in order to avoid these minors being arbitrarily detained and expelled in violation of international law. More generally, a better awareness of children’s rights is necessary.

Unaccompanied Moroccan minors in Europe: the sign of a failure of child protection

In addition, the Kingdom of Morocco faces another problem: Moroccan minors who leave for Europe in search of a better future. This is similar to child migrants from Central America wishing to enter the United States.

An agreement was signed in June between the French and Moroccan Interior Ministries that allowed Moroccan police to operate in Paris and “identify minors and expel them from French territory”. [4] This radical method has been denounced by NGOs working for child protection. More generally, this phenomenon is ringing alarm bells in the case of unaccompanied Moroccan minors typically found in Paris, who have already been subject to 813 detentions, according to the newspaper “Le Monde”.

This unmanageable crisis for the Paris City Council is also related to the desire of these young people to flee their home countries. Despite a certain willingness on the part of Morocco to protect children in accordance with national and international children’s laws, there are failures in coordination and coherence to prevent these minors leaving for Europe. UNICEF Morocco states that “social services intended for repatriated migrants are only provided by local NGOs or by national mutual assistance under the technical coordination of designated Spanish NGOs financed by Spanish autonomous regions” (for example, in Ceuta and Melilla).

Moreover, the United Nations encourages Morocco to implement a prevention policy to retain minors who want to leave the country, or at least to delay their decision. Therefore, “UNICEF encourages solutions that promote the return of migrant children to their immediate or extended families or to communities willing to take care of them”[5]. UNICEF encourages Morocco to follow the recommendations of the Committee on the Rights of the Child. This means it should prevent the emigration of Moroccan minors to Europe by promoting their reinsertion in school, as well as by ensuring that unaccompanied Moroccan minors repatriated to Morocco are directed to their families or to child protection social services, in order to be reintegrated into society.

Pending any action by the Moroccan State, these children who are hoping for a passage to Europe near Moroccan ports are the migrants of tomorrow and must be included in the Moroccan migration issue.

[2] Statistics taken from the study conducted by Caritas Morocco.

[3]    In addition, in Morocco there are no tests for determining the age of minors who carry no identity documents