The Children of Myanmar 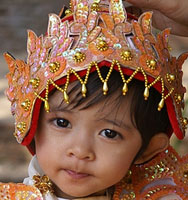 At the beginning of the 1960s, Myanmar was one of the most prosperous nations in southern Asia.  Since 1962, however, it has been governed by a military junta, and has in the process become one of the poorest countries in the world.  Not surprisingly, very little respect is shown for children’s rights. 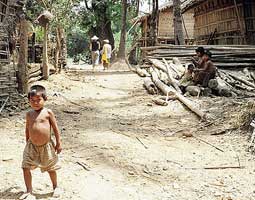 Myanmar suffers from structural poverty.  32 % of the population lives below the poverty line.  For example, the Gross National Product (GIP) per inhabitant is $1,246.This sort of poverty prevents children from enjoying their most fundamental rights.  Children from rural areas are especially hard hit.Right to Health
Lack of equipment and competent personnel has a considerable effect on the health of children, particularly those  from poor families.  In effect, around 70 ‰ of Myanmar’s children die before the age of 5.Other alarming health indicators include such things as dietary deficiencies (often present from birth) and AIDS (often passed from mother to infant); it is estimated that numerous children suffer from these two problems.Suffice it to say that, in order to improve the living conditions of children, the risk of mother-to-child HIV infection needs to be eradicated.Right to Education

Instruction is free and obligatory up to the age of 10—which is well short of the international average.  It is estimated that 20% of Myanmar’s children have no schooling.The government provides no real funds for education, and parents are not always able to finance their children’s studies.ViolenceThe children of Myanmar are regularly the victims of violence:  physical, sexual, psychological, etc.Violence directed at children very often occurs in the context of the armed conflict raging through Myanmar.  Owing to this deplorable situation, it is all the more difficult to set up structures dedicated to meeting the needs of children.Child Labour 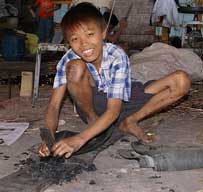 Children from poor families are the principal victims of this problematic.  In effect, many of them are obliged to find work in order to support the needs of their families.Often, they are forced to work in mines, on construction sites, or as domestic help.  These forms of work are dangerous for their health and has a negative effect on both their physical and psychological development.Displaced ChildrenIn Myanmar, economic difficulties and armed conflict have caused more than 500,000 people to flee their homes.  The situation is alarming:  more than a third of those displaced are children.Witnesses to atrocities and sometimes victims of violence themselves, these children lead intensely stressful daily lives.  Deprived of shelter, of access to an education and the most basic social services, they stand in dire need of protection.  Indeed, much needs to be done on that score.Child Soldiers 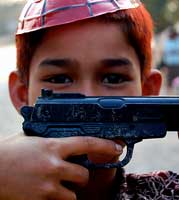 The minimum age for enrolment in the army is 18; nevertheless, children as young as 14 are often kidnapped and forced to fight against ethnic rebels.These children pass their days in training camps where conditions are absolutely awful:  violence, filth, lack of food, etc.  Certain of them desert the camps but they do so at their own peril.Identity65 % of births are not officially reported in Myanmar.  Rural regions are particularly affected by this problem, since midwives register births in an informal manner.Very few births are reported to the proper authorities; consequently, many children do not officially exist in the eyes of society.