Each year, millions flee their homes, willingly or under duress, due to armed conflicts, widespread violent situations, persecutions, violations of human rights and natural catastrophes. Nearly half of them are children. It is they who are most vulnerable to the dangers that lead to such displacements. A child in exile is a child whose rights are inevitably violated.

To better understand the challenges of this theme, it is important to differentiate between the many categories of children:

A child refugee is a child who crosses international borders and has specific rights. 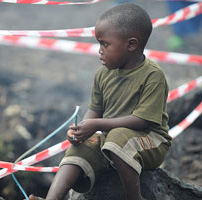 As a result of armed conflicts and other catastrophes, many children find themselves separated from their parents or guardians. As their status is never immediately confirmed, such children are not considered to be “orphans” but as “children separated from their family” or “unaccompanied children.”. (1) 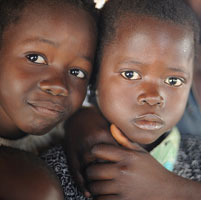 All these reasons generally imply blatant violations of human rights. Persecutions remain the main cause of such violations as they directly threaten the freedom and even the lives of certain social groups.

Natural catastrophes such as droughts, floods, earthquakes, tsunamis and famines as well as catastrophes due to artificial causes such as nuclear and industrial activities, equally contribute to vulnerable populations living in exile.

Recruitment to armed forces, sexual exploitation, abuse and violence, forced labour, adoption in irregular conditions, discrimination within the temporary communities thus resulting in difficulties in access to education and leisure are some of the numerous risks faced by displaced children.

Most of the time, displaced children find themselves separated from their close relations during such an event. Deprived of the care and protection of their family, they become very vulnerable to exploitation and abuse. Moreover, they are generally weakened by the long distances that they are forced to travel and by the difficulties they have to thus endure. Hence, they become easy targets for smugglers, traffickers, and/or armed groups.

The Consequences of Exile for the Child 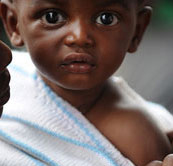 Living in exile has a no. of dire consequences, especially ones which adversely affect children. The trauma caused by being on the run, the traveling, the waiting etc. is rather difficult to overcome especially due to the lack of psychological support. Psychosocial distress can develop in children who live in transit and must hide or are forced to live in unhealthy or inhospitable environments.

This physical and psychological vulnerability, the loss of sources of income and means of subsistence (such as the loss of land etc.) can directly lead to the reduced access to education, thereby creating a sense of precariousness in displaced individuals.

Another problem that is frequently faced by displaced children is that they are often deprived of their identification documents. In most cases, such documents are lost, stolen or destroyed in order to escape prosecution. However, they are nevertheless essential for the recognition of their rights, especially their identity.

Needs and Rights of Displaced Children 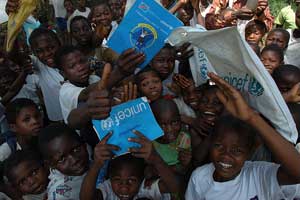 The recognition of the rights of these children in exile is essential whether it is the right to food, health or education etc. They in effect require shelter, food, safe water and medical care. They also need to have access to education and thus be able to go to school. Having lost everything, education represents the opportunity for them to have a better life once they return from exile and all children should be entitled to this vital requirement.

And you, what can you do: