AIDS is a health condition whose impact continues to grow year over year.  It is a recognized worldwide problem that kills millions of people per year.  Children are not immune to its effects.  Some of them are among its direct victims (seropositive children) while others are indirectly affected by it (children who have become orphans as a result).  To fight AIDS effectively, immediate and universal actions are required. 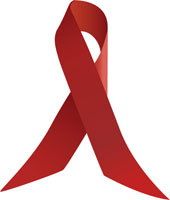 AIDS (Acquired Immunodeficiency Syndrome) is a health condition where progressive failure of the immune system allows other opportunistic infections, cancers and malignancies to thrive within the human body.  It is caused by HIV (Human Immunodeficiency Virus).  One speaks of AIDS when HIV has reached the final stage of infection and the person who is afflicted by it is no longer able to resist the illness and infections which have consumed their body because the virus has weakened them and made them extremely vulnerable.

When the immune system is fragile, the various infections, which would normally not be dangerous, weaken the body of the infected individual until eventually they die.

It should be noted that AIDS does not normally manifest itself immediately after the infection.  A seropositive individual can, in fact, go on living for quite a while without exhibiting any symptoms of the virus.  Initially, the only way to determine if a person has HIV is to subject them to a blood test.

The virus can be transmitted in three ways:

The threat which AIDS poses to the population is extremely serious.  It is estimated that since 1981, AIDS has killed more than 28 million people.  Each year, more than 8,000 people die of AIDS. The region of the world that is most heavily affected by the disease is southern Africa.

Today, many researchers are working to find a cure for AIDS, but no one has yet succeeded.  “Antiretroviral” treatments have been discovered and have served to prolong the lives of seropositive individuals.  However, such treatments do not heal those who already suffer from it.  Nor, to this day, are there exist vaccines that can immunize a person against AIDS.

In 2012, the total number of children suffering from AIDS, worldwide, rose to 2.2 million; 90% of whom were to be found in sub-Saharan Africa.  This number has substantially increased over the past decade; in 2001, the number was only 1.6 million.

According to the United Nations, 370,000 children below the age of 15 are infected every year by the virus.  That means that, throughout the world, each and every minute 6 people under the age of 15 become infected.

While it might be tempting to believe that AIDS does not directly affect young people, that is not the  reality.  A third of the world’s seropositive population consists of individuals whose age varies from 15 to 25.

Impact of AIDS on Children’s Survival

Current treatments allow us to prevent seropositive children from dying and enable them to live an average of 35 years.  As a results of  scientific progress, no child should have to die from AIDS.  However, in areas most affected by AIDS, access to the necessary treatments is far from easy.

For example, in Africa 50% of babies suffering from AIDS die before the age of 2 if they are not treated; this is, unfortunately, the case for far too many of them.  However, the death of children who acquire the virus from their mothers is something that could be prevented.

Among the indirect victims of AIDS are children whose parents have succumbed to the virus. Regardless of whether or not these children have actually contracted AIDS, they are already victims of it by having become orphans. 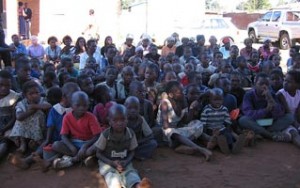 In 2012, the worldwide count of children orphaned by AIDS was around 15 million.  Their future is bleak and every day is a fight for survival.  They find themselves on their own, without resources or aid.

The majority of them live in poor countries, and their existence is nothing short of miserable.  In general, their home is the street where they live in abject poverty and are often the victims of poverty, violence, and economic, as well as sexual exploitation.  Gaining access to health services, an education or simple shelter is extremely difficult for them, if not impossible.  The principles of the International Convention of Children’s Rights are thus, with regard to the orphans of AIDS, far from being respected.

Infected children do not always stand on an equal footing with other children.  Indeed, it is often much more difficult for them to get an education, to receive public aid, or to find housing.

How Can We Help Children Facing AIDS?

Four types of intervention are needed:

To fight AIDS, one must understand what it is.  If everyone in the world was familiar with AIDS and knew how to avoid it, there would be fewer victims.  From an early age, children must be given reliable information about AIDS and how it is transmitted.

Alerting children to the risks of unprotected sexual contact will be of considerable help in reducing the prevalence of AIDS.  However, even today, public awareness campaigns are far too few in number and do not reach the population at large.

It is estimated, for example, that in Africa only 23% of persons from the age of 15 to 24 have a general and accurate understanding of AIDS.  In southeastern Asia, the statistic is even lower:  21%.

In addition, prevention efforts must be intensified with regard to seropositive mothers.  In 2007, the number of females older than 15 years of age and living with AIDS was determined to be no less than 2 million.  Many of them were ignorant of the risks the virus posed to their babies.  They were also ignorant of the fact that treatments exist to reduce  these risks. 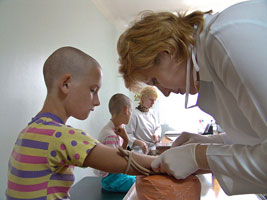 The majority of seropositive individuals do not realize that there is anything wrong with them.  In general, until they are discovered to have AIDS, their behavior is sometimes on the risky side.  Up to that point, they did not know that they were infected and were unaware of the risks.  If the entire world population had easy access to screening tests, many cases of transmission could be avoided.

In some regions, access to treatment is guaranteed for all but this is not the case everywhere.  For example, in Africa, among individuals in an advanced stage of HIV infection, a mere 44% receive an antiretroviral treatment, while in southeastern Asia, only 40% do. 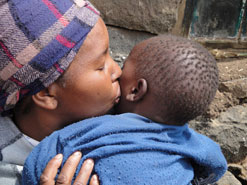 Only 45% of pregnant seropositive women receive antiretroviral treatments.  However, during pregnancy, the risk of the mother transmitting the virus to her infant ranges from 20-40%.  This risk could be considerably reduced through preventive treatment.  Antiretroviral treatment in conjunction with a caesarian section and artificial milk permits a reduction in the risk to less than 1%.

If access to treatment were guaranteed for everyone-everyone, be they children or adults, Africans or Europeans, women or men, and so forth, then many cases of transmission would be avoided, and seropositive individuals could live under better conditions.  The deaths of children and adolescents on account of AIDS would also be reduced.

In addition to medical support, persons affected by AIDS need to receive psychological support.  Moral support for sick persons is insufficient.  Many seropositive children receive no mental support in their battle against AIDS and its atrocious effects (isolation, discrimination. . .).

In addition, the children of seropositive individuals must receive moral and material support.  Children who have become orphans on account of AIDS must be placed in responsible hands.  They must be helped in a manner that will change their future for the better. Some NGOs are devoted to helping children, but there are far too few of them to effectively combat the ravages of AIDS.

Certain NGOs are committed exclusively to helping children affected by HIV.  Do not hesitate to contact them: