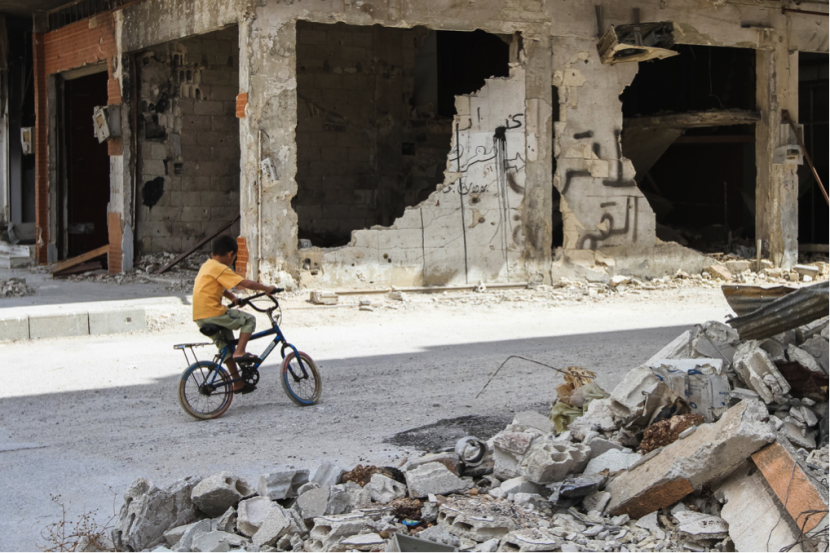 Massacres, bombings, battles.. are the words that pop up in your search engine if you type Eastern Ghouta. Between 2013 and 2018, this Syrian rural area to the east of Damascus was besieged by the regime of Bashar El Assad. Proclaimed a “de-escalation zone” in May 2017, the isolated region was home to 367,000 civilians, half of whom were children (UOSSM, October 2017). On February 21, 2018, The British newspaper The Guardian declares it has been the theatre of the biggest massacres of the 21st century. Every day, at the gates of Damascus, civilians died due to air strikes or starvation. On May 21, Eastern Ghouta returned under the effective control of the Syrian regime, putting an end to 6 years of fighting. Humanium reviews the situation of children in Eastern Ghouta.

An escalation of violence that did not spare children

The main stronghold of the rebellion in the Damascus region of Ghouta was quickly caught between the regime of Bashar El Assad and the various factions of the opposition. In 2013, the army chemically attacked the population with sarin gas, leaving 1,429 dead including 426 children (Le Figaro, April 2017). Following the attack, the region is besieged by armed troops. The civilians’ daily life is punctuated by the fights between the different religious militias and the truce violations of the regime. On October 31, 2017, 6 schoolchildren are killed in the town of Jisrine, due to bombs fired by the regime hitting the school entrance while children are leaving the building (RTBF, October 2017). The same day, artillery fire kills about 10 people including 5 children (Le Figaro, October 2017). Besieged for 4 years by the army, the region found itself deprived of any outside help; a situation Aleppo experienced in December 2016. On February 22, 2018, five days of air strikes and intense artillery fire kill 403 civilians, including 95 children, according to the Syrian Observatory for Human Rights. It is on social networks that Syrians find a way out of isolation and are able to deliver their testimonies. 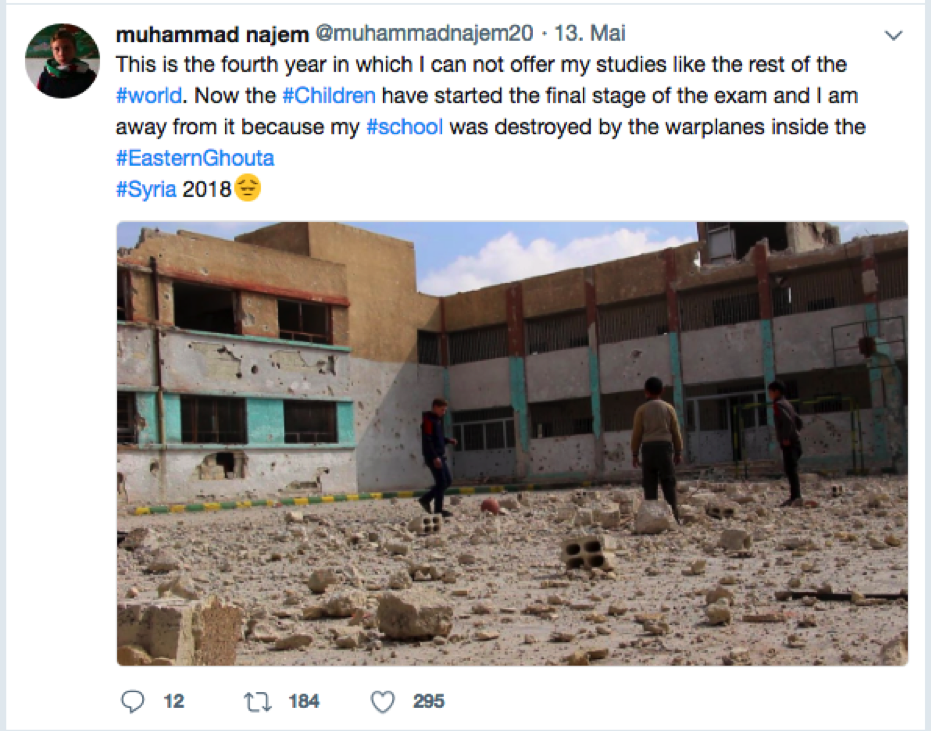 This is the case of Muhammad Najem, a teenager barely 15 years old who, through his twitter @muhammadnajem20, has become the symbol of the Syrian martyr. While standing in front of a pile of rubble on January 15, 2018, he asks us in phonetic English: “Who is this world that can send machines to the Martians and do nothing to stop the massacres?”  On Facebook, another Syrian victim, Dr. Housam Adnan, denounces regular regime attacks on hospitals; attacks that violate the internationally ratified Geneva Convention stipulating the immunity of hospitals and medical personnel in conflict zones. But in the midst of the dead and wounded, photos from the doctor’s Facebook shout to the world: these are young children, why are they scrawny and emaciated? For months, the regime has been blocking access to humanitarian aid of basic necessities, leaving the population facing the serious threat of malnutrition of which the youngest children are the first victims.

Of the blockade of Ghouta remains the image of the small Sahar Dofdaa, a skeletal infant who succumbed to starvation a few days after its picture is taken. Even though hunger was gnawing the region, Goutha stayed cut off from the rest of the world and no NGO could deliver the amount of basic necessities needed but they had to be sent drop by drop. Numerous mothers with anemia could not breastfeed, which directly affected young children. (RFI, October 2017) According to Tamara Kummer, the spokesperson for UNICEF Middle East, between July and September 2017 more than 1,200 children were suffering from acute malnutrition, a quarter of which were severely malnourished. Deprived of drugs and personnel, the local medical services struggle to relieve the situation. Since 2013, the medical situation keeps on  deteriorating as another 40 health centers and hospitals have been destroyed. For Dr. Ana Abu Yassir, director of Al-Marj’s medical office, the situation is catastrophic. The shortage of vaccines threatens the health of the youngest and the chronically ill. Syrian doctors have already rang alarm bells in 2015, evoking a medical disaster where injured populations can not be treated properly and where diseases such as polio, tuberculosis, scabies or typhoid have resurfaced. (Tribune de Genève, January 2015).

“God, Syria, freedom and that’s all” – A look to the future 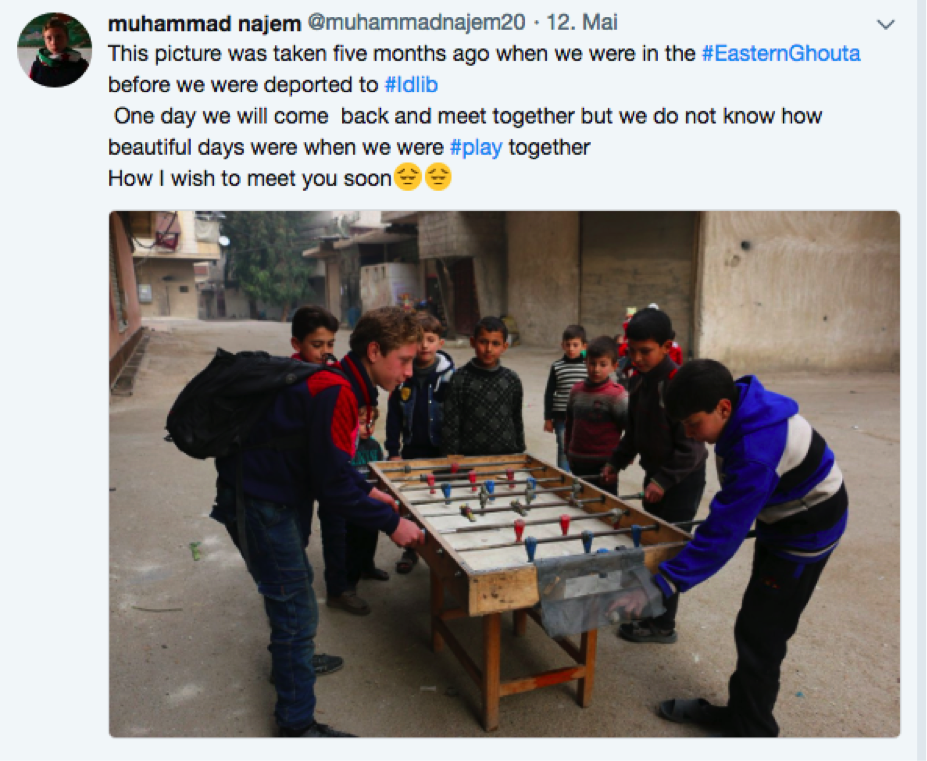 If today we mention the Syrian issue only by dealing with terrorist groups and war tactics, it is good to remember that the 2011 civil uprising was pacifist and aspired to broaden rights and freedom. When you type Eastern Ghouta in a search engine, in the midst of battles and political statements, you will find a Wikipedia page stating that Ghouta in Arabic also means Oasis. “And for a few triumphant oases, what immense deserts to cross,” said André Gide.

Humanium’s team is committed every day, body and soul, to put an end to violence and physical and mental abuse of children around the world. We strive to uphold the rights of every child in the world, educating adults and children about our cause, changing attitudes, and working directly in the field.

Visit our website https://www.humanium.org/en/ to learn more about children’s rights and our work, to contact Humanium’s team, and to stand beside us in improving the life of thousands of children throughout the world!