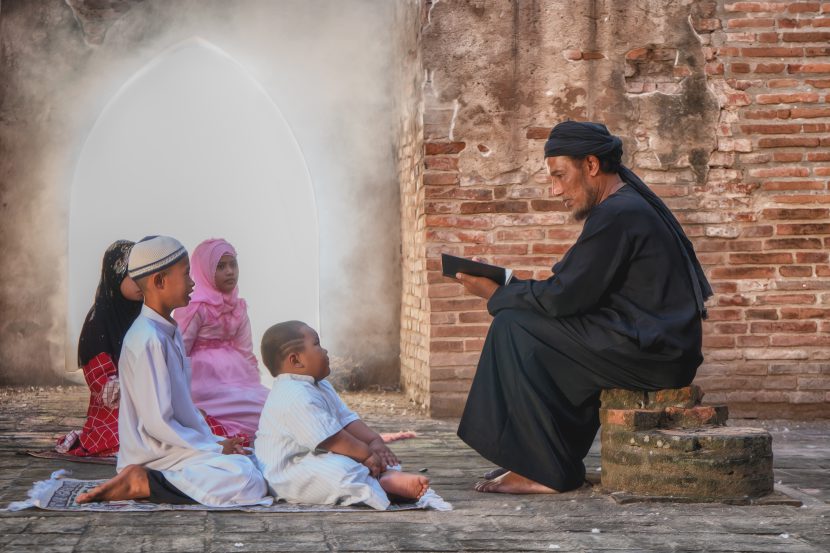 In Senegal, although the children are worshipped, their rights are not highly prioritised. And with more than 50% of the population under the poverty line, the children of Senegal are often used as a workforce. They suffer from many diseases, including polio, malaria, diarrhoea, and iodine deficiency. In regards to education, only 60 % attend school. It is mainly boys that attend, with only 1 out of 5 girls attending high schools.

Senegal is a predominantly Muslim country, with 92% of the population considering itself part of the Islamic faith. Consequently, Islam plays an important role in the education system. The schools for children are named “daaras” and are Quranic schools. Quranic schools promote religous culture and are where Muslim students learn their religion. The children are the “talibés” and are entrusted to marabouts, where religious instructions are then carried out. Out of a population of 16 million, there are approximately 50, 000 to 100, 000 talibé children. (Los Angeles Times, 2019)

Lack of regulation within the schools

Numerous forms of violence at the daara

There are multiple forms of violence that are frequently used against children. Firstly, children can be tied up and subject to certain forms of confinement. Some are locked in cages, unable to move or receive any food. In addition, they can be beaten, by the authority of the daara, but also by older talibés. Secondly, some girls and boys are sexually assaulted by the authorities and are abandoned. (The Guardian, 2017). Finally, as a consequence of the harsh conditions the children face, many choose to flee back to their parents who force them to return to their respective daara. However, the parents have not been helpful in preventing the constant assaults of children in their schools as they continue to send them back to the same institutions. (The Economist, 2019) This situation is made more complicated by the fact that the religious schools are free, and offer ‘good’ opportunities for families living in poverty, which is predominantly the case in Senegal. (Los Angeles Times, 2019) Their rights are also threatened by the unsafe living conditions, which have triggered numerous fires, causing the deaths of the children who were unfortunate enough to be tied up. (The Guardian, 2013) Furthermore, as reported by the HRW in the report, the 22 daaras were contaminated with infections and illnesses, but children had not received medical treatment. 13 of the 22 daaras provided little or no food to the children, which hence increases the chances of disease for many of the children. (Human Rights Watch, 2019)

In addition, the daaras are sometimes places in which children are collected and used for child trafficking. (The Guardian, 2013) The talibés are abandoned in distant cities, losing sight of their ways and their familiar setting, ultimately disorientating them further. As reported by the Los Angeles Times, the children are sometimes sent across West Africa, in countries like Guinea, Mali, and Gambia. (Los Angeles Times, 2019) All of these conditions demonstrate the way in which children are treated as objects and commodities, rather than as humans with deserving rights.

The latest report, focusing on eight of the fourteen regions of Senegal, has announced that 63 of the 88 talibés interviewed recalled their Quranic teacher forcing them to beg for a daily quota ranging from 100 to 1,250 francs. (Seibert, 2019) In this document, Human Rights Watch has mentioned 61 cases of beatings or physical abuse, 15 cases of actual or attempted rape or sexual abuse, and 14 cases of children imprisoned, tied, or chained. All in all, the children are neglected and ignored; they are mistreated. (Human Rights Watch, 2019)

It is not the first report, however, that outlines the childrens’ conditions in the daaras. The Guardian has often commented on the reports and on the worsening conditions of the schools in the country. In 2005, rules were put into place to criminalize forced begging, but these laws could not necessarily be applied to religious schools. (The Guardian, 2010) In March 2013, after the killing of 9 children in a fire in a local daara, President Sall and his government promised changes but these did not occur. (The Guardian, 2013) Three years later, in June 2016, the government attempted to reduce the number of children on the streets in order to help the talibé children; however, they were then sent back to their religious schools, with the same teachers. (The Guardian, 2017)

What help has been given?

Nonetheless, there are many ways in which NGO’s, journalists, and Human Rights Watch have helped. First of all, Human Rights Watch has often based their reports on the interviews they conducted with children, allowing them a voice outside of the country in which they live in. By reporting on the situation through the childrens’ eyes, Human Rights Watch is giving them a means to take agency in their story. (Seibert, 2017, 2019) It establishes a relationship of trust between NGOs, reporters and journalists, and the talibé children. (The Guardian, 2013) This legitimizes their cause, and allows children to understand what is correct and what is not, while allowing them to be the speakers of their suffering. The Los Angeles Times, for example, has based their whole article of Senegal’s situation in religious schools on the story of Ahmadou Cisse, a 14 year old boy working in a marabout near Dakar, who is forced to beg on the streets of the city. (Los Angeles Times, 2019) Henceforth, although the authorities within Senegal have largely ignored the situation, HRW and other NGO’s have been able to help. It is in this context that Huamanium takes on responsibility by making the world more aware of the situation in Senegal. By raising awareness, Humanium hopes to gather support for these stricter school regulations. Humanium’s projects have focused on the mental well-being of children, and the situation in Senegal is a violation of that.

In particular, HRW has helped by pushing for government action and calling on President Sall to implement stricter laws of regulation of the daaras. (Human Rights Watch, 2019) 2018 saw the adoption of the 2013 draft law to “protect children” and to establish legal standards for daaras, which resulted in Sall’s victorious second term. (Human Rights Watch, 2019) However, no further action has been taken. In early 2019, the National Assembly had not yet passed the 2013 draft law. HRW are calling for the investigation and prosecution of those who have been guilty of forcing children, including teachers and parents who have intentionally neglected their students by returning them to abusive daaras. They are encouraging the authorities to consider the measures in relation to the best interests of the child, by stating that daaras endangering childrens’ wellbeing should be immediately reported and inspected. In short, they are emphasizing national standards for daara operation and an adequate response if the daara fails to fulfill its duties. (Human Rights Watch, 2019)

What to do now?

NGOs, reporters, journalists, and other organizations should continue to report on and investigate this situation as it is crucial for the children in Senegal. Their rights are not being respected, and with lacking resources, they are not able to fight this on their own. It is crucial that they receive help. By making the world more aware of this situation, Humanium can make people understand why it is necessary to push President Sall to drive the changes we want to see in Senegal. We need to do it now, as the situation is dangerous for children, and it has been going on for decades too long. In 2013 -2014, Humanium conducted a project in Senegal, building a primary school in a local village. With new teachers and new programs, Humanium was able to provide for disadvantaged children. Although this was not interlinked with religion, it is crucial that the daaras follow through with a similar type of education, that gives poor and disadvantaged children an equal opportunity to thrive and broaden their future horizons. Humanium can provide advice as to how to conduct the teaching in the new schools once rules have been put in place to criminalize violations of children in daaras. But first, we must raise awareness, as an NGO, on the conditions, in order to gather support.